This is a combo that went under the radar until a few people did very well with it at the 2009 Pokémon TCG National Championships. It was used in Pokémon SP decks that contained Palkia G LV.X.

Palkia G LV.X abuses its Lost Cyclone Pokémon Power to get rid of Pokémon that are no longer needed on the bench. It usually uses 4 Mesprit to lock the opponent’s Pokémon Powers, then removes them with Lost Cyclone. It also uses an Uxie or 2 just to draw cards. So why not add an Azelf MT? With its Pokémon Body Downer Material, each of your opponent’s Basic Pokémon’s attacks costs C more as long as you have all 3 pixie Pokémon in play.

This can give you a huge advantage when up against any deck based on Pokémon SP. Since all their attacks cost an extra energy, they’ll have a tough time keeping up. It also helps against Basic Pokémon meant to give your opponent a chance to set up. Chatot can no longer Mimic for free, now it costs an energy.

There are a few things to watch out for when using the pixie lock.

Dialga G LV.X – A leveled up Dialga means no Pokémon Bodies for the pixies.

An opponent’s Palkia G LV.X or Dusknoir DP – If the opponent can reduce your bench to 3, there’s not enough room to have all 3 pixies in play.

Let us know what you think of the pixie lock! 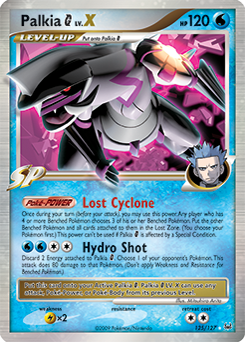