In the past, there was a deck called “Mew Lock” which utilized Mew ex from Legend Maker and Pow! Hand Extension from Team Rocket Returns along with a plethora of tech basic Pokémon. The ultimate goal of the deck was to create a lock by keeping your opponents active Pokémon stuck in the Active Spot without any energy for the whole game. The opponent would not be able to attack or retreat, thus it was nearly impossible for them to win once the lock was in place.

I have come up with a potential lock for this current modified format. The lock involves using Palkia LV.X from Great Encounters, Ariados from Mysterious Treasures, and Flygon LV.X from Rising Rivals. Here is the basic strategy:

In order for the lock to work, your opponent must first play a supporting Pokémon on their bench that cannot attack you (or cannot do much damage). Such Pokémon to target would include Claydol GE, Azelf LA, Bronzong G PT, Crobat G PT, or Skuntank G PT. It depends what type of energy your opponent plays in their deck whether you should target those Pokémon or not, but typically your opponent won’t play the correct energy to attack with those listed Pokémon.

You will need to get at least Palkia LV.X GE and Flygon LV.X RR out in play. Ariados MT is not totally necessary, but makes the lock much stronger. Once you those Pokémon out, use Palkia LV.X’s “Restructure” Pokémon Power. Make your opponent promote their non-attacking support Pokémon and your opponent will make you promote any one of your Pokémon in play. As long as you have the correct energy attached to Flygon, all your Pokémon will have free retreat due to Flygon RR’s “Rainbow Float” Pokémon Body. If you really wanted to be tricky, you could wait to attach your energy for you turn after your opponent picks your benched Pokémon to bring active, then just attach the energy of whatever type that Pokémon is. You will now want to retreat your active Pokémon and promote Flygon LV.X RR.

The cool thing about this lock is that you do not even have to attack! We want to make use of Flygon LV.X’s “Wind Erosion” Pokémon Body. The goal is to make your opponent run out of cards. In between each turn they will be required to discard a card from the top of their deck. Your opponent will be forced to attach energy to their active Pokémon in an effort to retreat it so they can attack you with one of their attackers. You will simply need to let Flygon LV.X sit in the Active Spot and do nothing else!

In order to thwart your opponent’s plan to retreat their active Pokémon, Ariados MT’s “Sticky” Pokémon Body will make their Retreat Cost more than usual. If you can get more than 1 Ariados in play, their Retreat Cost will be increased by even more. Lets say for example you trap your opponent’s Claydol GE in the Active Spot. If you have an Ariados MT in play, Claydol’s Retreat Cost will be 3. This means Flygon LV.X RR will be able to sit in the Active Spot for a whole 3 turns untouched. You will discard 5 cards from their deck before they have a chance to do any damage to you. As soon as they have retreated, simply use Palkia LV.X’s “Restructure” Pokémon Power again to gust up their Claydol and make it sit there for another 3 turns!

Your opponent can be put in a total lock if they fall behind in energy attachments at any point in the game. They will be forced to play all their energies to try to retreat their active Pokémon, but if they have insufficient energy on their benched Pokémon as well, they will never be able to attack you. You may also discard energies from their deck through “Wind Erosion”, so you opponent may simply run out of energy cards.

There are a few potential obstacles that can make the lock difficult to achieve. If you opponent plays Switch, Super Scoop Up, or TG’s Invention Poké Turn, they will be able to save their Pokémon from the Active Spot and attack you quicker than normal. However, as you will be discarding cards from your opponent’s deck almost every turn, you may discard these cards that would have been able to save them. Dialga G LV.X PT would also be able to potentially stop the lock, but you can Knock it Out on the bench with Flygon LV.X’s “Extreme Attack”. Dusknoir DP is one other card that could put a dent in your lock, as it may be hard for you to manage your bench space.

[ad#adsenseBoxL]I will post a list for this combo once me and Jeremy get a chance to test it out. Jeremy and I have been on vacation at alternating times, so we have not had much opportunity to play Pokémon lately. Be sure to let us know what you think of this idea. 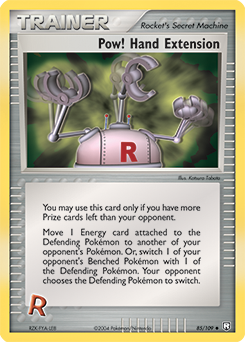