The ideal start would be a Skunktank, Honchkrow or a Stadium and either Zangoose, Grimer/Muk or Poochyena/Mightyena.

With a Honchkrow start and no stadium, you can use Honchkrow to get a stadium (no energy attack).
Poison both active Pokémon with Skunktank’s “Poison Structure” as soon as you have a Zangoose, Muk or Mightyena active.

Zangoose can’t be poisoned. Muk heals himself when poisoned. Mightyena gets an energyless 50hp attack when poisoned (80 if the defender has at least one energy attached).

Mightyena has a free Retreat Cost so he can be retreated after one or two attacks (as he will have suffered poison damage). He has relatively low hp (90) so needs to be in and out quickly unless facing a weak/basic Pokémon. If you have 1-2 Mightyena that have been benched with damage you can take one turn to use Unown V to remove two damage counters from each benched Pokémon (it’s his Power, but ends your turn).

Muk heals two damage counters between turns when poisoned so he should really be your main attacker. With 3 energy, he can hit for 70 and an automatic confusion when he is poisoned.

Zangoose has a “gust of wind” attack that can pull out a weak Pokémon from the bench. Unfortunately you won’t be able to use Poison Structure to poison the defender until next turn. If you can get him powered up with 3 of any energy he can hit for 50 hp plus 10 hp to each benched Pokémon with damage on it.

Honchkrow has a sniping ability to hit benched Pokémon which can be helpful mid to late game. His attack does an extra 20 (for a total of 40) to Pokémon that already have damage on them.

Toxicroak G is a good starter/staller due to his Poké-Power Leap Away, which can bring him and any attached cards back into your hand on a coin flip. As an SP he is not affected by Poison Structure.

Unown V, as already mentioned, can heal 20 hp from all benched Pokémon (but it ends your turn).

Unown F has the Poké-Power Fake, which gives you the possibility of drawing a card every turn (you put down a coin, the opponent guesses if it is heads or tails – if they are wrong you draw a card).

Xatu can use his Psychic Shift Power to shift the poison from your active Pokémon to the opponent’s. This is a good way to poison Sp Pokémon (which are not affected by Poison Structure). He is also capable of shifting over other conditions that your opponent might inflict upon your active Pokémon.

In addition to allowing Poison Structure to work, the various Stadiums have their own uses:
Moonlight Stadium – free withdraw for Grimer/Muk
Pokémon Contest Hall – good early on for getting out basics
Speed Stadium – good draw ability

You need a variety of Stadiums in order to be able to counter your opponent playing the same Stadium card that you have, as you cannot replace one Stadium with one of the same name.

This deck is pretty good at getting basics, as Grimer and Poochyena both have attacks that call for family (Division and Howl respectively).

Night Maintenance helps to recover Energy/Pokémon you might need from the discard pile.

Dusk Ball and Luxury Ball are to help get Stage 1 Pokémon.

Lucian’s Assignment helps manage or save Energy that you have in play by switching as many Energy from one Pokémon to one other as is needed. You could have powered up a Zangoose early and then want to switch the Energy over to Muk.

Finally, Warp Point helps you switch out Muk if there is no Moonlight Stadium in play. Of course the opponent also makes a switch, and this can be used to get rid of a powerful active Pokémon. When you do use Warp Point, you need to make sure you wait to announce Poison Structure until after your opponent makes the switch, so that the new defender gets poisoned.

Its pretty obvious that you are not really going to want to be putting Energy on Poochyena or Mightyena. The Special Darks are for Honchkrow (note however that the +10 hp only works when he is attacking the active Pokémon, not sniping).

Toxicroak, the Unowns and 1-1 Xatu could easily be taken out and replaced by other techs, e.g.:

The key to this deck having any chance of winning is to get the Skuntanks and a Stadium early and to always try to have another Stadium as backup. Also, as this deck is very dependent on Poké-Bodies, Dialga G level X is a big threat. If Dialga G comes into play, Zangoose can be used to pull him up to attack him in the Active Spot, Xatu can transfer poison to him, Honchkrow can snipe him, if or when he returns to the bench.

This deck is relatively fragile as the main attackers, Muk and Mightyena, only have 100 and 90 hp respectively. Similar to an SP deck, setting up fast and hitting hard and early is another vital strategy to promoting success.

I’m not suggesting this is a National or World contender but it is fun to play. 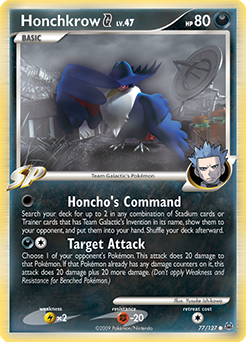