I tested this deck versus Jeremy’s Beedrill last Friday and went 2-2 in 4 lackluster games. Before I delve into any analysis, here is the list:

I had come up with this idea during my one of my brainstorming sessions when I was first getting back into things last month. The basic strategy is to limit your opponent’s hand and give them no options. This is objectived is achieved by utilizing two different Pokémon: Empoleon and Giratina.

The ideal setup is to get both Empoleon LV.X and Giratina LV.X in play. I recommend aiming to get Giratina LV.X out first because I prefer to send Empoleon LV.X active only once you have established your field, and are able to promote it with no damage so it will last a few turns.

During our games, tried to attack with Empoleon PL a majority of the time using its “Knock Off” attack, which lets you discard a card from your opponents hand at random. It only does 40 damage, which I know is weak, but when combined with Giratina LV.X’s “Invisible Tentacles” Pokémon Body, it is far more effective. The trump card on top of all of that is Empoleon LV.X, which essentially gives your opponent two less cards in their hand to work with thanks to its “Supreme Command” Pokémon Power.

If you are able to get all of those Pokémon out, your opponent will be discarding 2 cards a turn and will have 2 less cards to use, bascially yielding a net loss of 4 cards from their hand every turn. That in theory seemed too good not to at least try out.

As I mentioned before, our games were fairly vanilla; one of us dominated while the other had a terrible hand. If I recall correctly, the first game we played I could not find a Claydol and was dismissed quickly.

Game 2 I had a turn 2 Empoleon PL with a full bench and a Claydol out. This game went on for a while, but I actually did manage to get Empoleon LV.X and Giratina LV.X in play and gained full control of the game.

Game 3 I went first starting with a Baltoy and Call Energy. I had a Giratina PL #9 in hand and elected to drop it in order to use its “Let Loose” Pokémon Power to shuffle both of hands into our decks and draw 4 cards each. I drew into some decent cards while Jeremy drew absolutely nothing, resulting in another easy win for me. It may have been a risky move playing Giratina first turn, but since I had a Call Energy, I decided to use it because I knew I would at least get my bench set up even if I drew nothing in my 4 cards. If my memory serves right, Jeremy only had 1 Pokémon to start and with 6 cards in hand, I thought it would be beneficial to set him back to 4 cards before he could play anything down.

Game 4 I feel my deck started to show some of its flaws. Jeremy setup quite quickly and my 40 or 70 damage per turn was not enough to slow him down. I just was not able to do enough damage to actually Knock Out any of his Pokémon. It also did not help that 2-of my Empoleon PL were prized and my Empoleon LV.X was prized, but I feel that did not that truly mattered. I just was not going to be able to draw prizes with my minimal damage output each turn.

In conclusion, I think that this is more of a fun deck than anything else. Luxray GL LV.X, which from what I’ve been hearing is a decent card, will be much too quick for this deck to handle. Empoleon’s lightning weakness is also a detriment at the moment. The biggest problem is that you have to be able to withstand your opponent’s initial offensive in order to gain control, which is not easy to accomplish.

Let me know what you think or if you have any suggestions by commenting below! :) 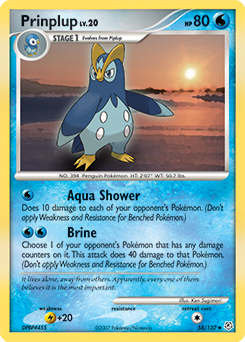