Machamp is one guy all Basic Pokémon should be scared of. For just one Fighting energy he can 1HKO any of them. And if they’re evolved, Take Out still does a respectable 40 damage. However, just like against Gengar, Unown G does a good job of blocking an attack. While Unown G is attached to a Basic Pokémon, Take Out will do nothing, not even 40 damage.

Hurricane Punch is a decent attack. Normally it will do 60 damage.

Rage is a very powerful attack, doing up to 180 damage. But 4 energy is expensive. It’ll take a while to get that attack charged up, unless you’re using the Regirock LA/Stark Mountain combo to get more Fighting Energy onto Machamp quicker.

If we’re looking at Machamp, we might as well look at Machamp LV.X too since it adds a lot of power to it. No Guard increases all of Machamp’s attacks by 60 damage, but it’s a double edged sword since all damage done to Machamp is increased by 60 too. It’s best to Level Up only when you need to KO a Pokémon with high HP. With 2 heads from Hurricane Punch that’s 120 damage, enough to KO most Pokémon out there. Strong-Willed is also a great attack. It does 80 damage due to No Guard, and with a lucky flip Machamp may survive to see another day. The turn after you Level Up, Machamp LV.X will probably get KO’d. But with a few Time-Space Distortions you can keep replacing them. As long as you took the first prize and you and your opponent keep taking 1 Prize each turn, you have a good chance of winning the game.

Machamp is very effective against Pokémon SP decks. Since Take Out will KO almost any of them in one hit, this forces them to attach Unown G, meaning they can’t attach Energy Gain, meaning it takes them longer to attack. However most SP decks take this into account, so they tech things into their deck like Toxicroak G PT, or Uxie/Uxie LV.X combined with Unown G to do severe damage to Machamp and prevent getting Knocked Out.

I believe Machamp works best as a small tech in a Stage 2 deck, not as a pure Machamp deck. It just doesn’t have enough fire power. If you’re up against an evolution deck, all you have to rely on are mediocre attacks and Machamp LV.X’s Pokémon Body. Gengar isn’t a fun matchup either. But if you’re using something like a 1-0-1 line, you can drop him out of nowhere to pick off 1 or 2 Pokémon SP that didn’t have the foresight to attach Unown G.

If you have any thoughts about this card, please comment! We want to hear from you. 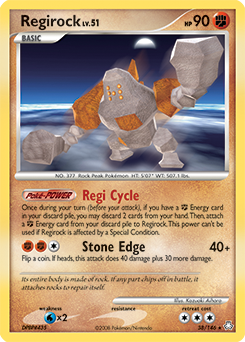