Only 3 Technical Machines are in existence in the current format, however Team Galactic’s Damage Porter from the Rising Rivals set is probably the best out of the three. A SEVERELY underrated and powerful card, Damage Porter deals 10 damage times the number of damage counters on the Pokémon that it is attached to, to any of your opponent’s Pokémon.

Unlike the other two TMs, this TM can only be attached to Pokémon SP. This poses as a problem, for all Pokémon SP are basic Pokémon, so they do not have much HP, leading to believe that this card is fairly useless for its expensive 3 energy cost and most likely your opponent would take advantage of your weakened Pokémon SP to KO it before you have a chance to attack with it.

One of the greatest assets this card has is that the card states “This attack does 10 damage times the number of damage counters on the Pokémon this card is attached to to that Pokémon.” It doesn’t say “Put damage counters equal to,” it says does 10 damage times! So Pokémon with Unown G’s Guard or Toxicroak G CAN be targeted. Also, TMs and Pokémon Tools are considered different card types, so you could have 1 Tool and a TM on the same Pokémon. Thus, Team Galactic’s Invention G-101: Energy Gain (attack cost of Pokémon SP it is attached to costs 1 C energy less) affects Damage Porter as well. So you can deal the damage for 2 energy.

This card is very effective especially on Pokémon SP with high HP, for example, the most used Damage Porter is Golem 4 RR. Golem 4, popular in the Luxray GL LV.X variants, has a high 110 HP and can deal a maximum of 100 damage with Damage Porter. Luxray GL LV.X’s attack does 30 damage to one of your Pokémon. So you can rack up damage on the Golem 4 and attach an Energy Gain, an energy, and Damage Porter to do a maximum of 100 damage to anything on the field. This can be the crucial turn of events that can possibly turn the game in your favor. Sniping that Guarded Claydol or that heavy hitter Pokémon that fled to the bench to be healed by Nidoqueen can be a real table turner.

I would definitely play this card in an SP deck, for EVERY SP deck runs 4 Energy Gains, and most of the Pokémon SP require 3 energy to attack anyway. A noble sacrifice for a damaged Pokémon can ultimately shatter your opponent’s draw power or can snipe those pesky retreating Pokémon. 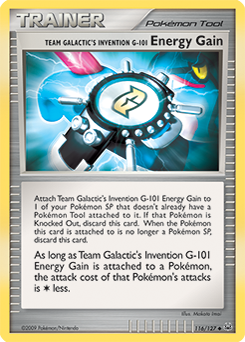