I would have to say my favorite type of Pokémon card is psychic. There have been a ton of really cool psychic Pokémon cards released over the years. Back in the day, I thought Mr. Mime from Jungle was awesome, as well as the movie promo Mewtwo, which in my opinion was a dominating card for Haymaker decks.

I didn’t play for a few years after Team Rocket was released, but when I got back into the game I took liking to Espeon from Neo Discovery. I won a Super Battle Zone with that card (used with Light Golduck and maxed out on Double Gusts, Gold Berries, and Focus Bands).

I honestly didn’t like Gardevoir from Ruby and Sapphire, but when Banette ex and Mew ex from Legend Maker were released, they were just gnarly cards. I played with both of them, using Mew ex with Manectric ex for part of the season and Banette ex with Vaporeon ex at Nationals when I made top 16.

Last year as everyone knows, Gardevoir SW was the dominant force and I actually enjoyed playing that deck. Right now Gengar SF is a pretty nifty psychic Pokémon as well.

I just think psychic Pokémon have always been good and that they have had a range cool abilities, you can’t pinpoint one attribute that has made them good.

(This post is a response to this poll. Be sure to take part in the discussion and cast your vote if you have not already!) 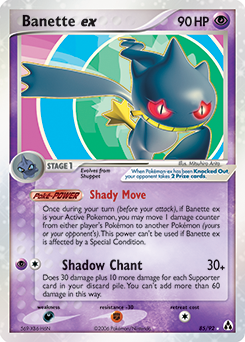