An ideal start for this deck would be Honchkrow G, Remoraid, Seedot, Nuzleaf and Technical Machine TS-1. Use Honchkrow’s “Honcho’s Command” to grab two Stadiums. In addition to getting the Stadiums, this starts to thin the deck, leaving a higher percentage of energy for Octillery’s “Water Vein” attack. If Honchkrow is not in your starting hand, then Remoraid or Diglett are both good starts. Remoraid evolves to Octillery who has an energyless attack (Water Vein). Diglett evolves to Dugtrio who has a free Retreat Cost.

Shiftry is the main attacker. Seedot should be left on the Bench and powered up with 3 Energy asap (at least one Darkness). This is in anticipation of evolving to Shiftry. Memory Berry should be attached to Shiftry. It can also be attached immediately to Seedot if you get Seedot using Pokémon Contest Hall.

With Memory Berry, Shiftry can use Nuzleaf’s “Feint Attack”, which can snipe the Bench. More importantly, he can use Nuzleaf’s “Blind” attack. Although it only does 10 damage, this has the effective (with Shiftry’s Poké-Body) of making your opponent’s next attack fail totally. So your opponent is forced to retreat or play a Switch or Warp Point. If they retreat, and you have Dugtrio on your Bench, they have two damage counters placed on their retreating Pokémon for each Dugtrio in play.

Shiftry’s attacks are used to cause most of the damage, ideally with up to 4 Special D Energies attached for +40 damage (for a possible 100 damage). If you can manipulate your hand so that you have the same number of cards than your opponent, the defender becomes confused. This will also force your opponent to retreat or play a Switch or Warp Point. If they try to attack while confused it will result in an automatic 30 damage as they will automatically roll tails, due to Shifty’s Poké-Body.

Dugtrio’s main job is to hurt the Defender when they retreat. Energy should only be put on Dugtrio if there are no other options. It’s best to spend Energy on powering up the Seedots, Nuzleafs and Shiftrys that are in play. Alternately, with two Energy, Push Down can force your opponent to switch out a troublesome active Pokémon.

Octillery is your pinch-hitter. His Water Vein attack is flippy but can be devastating. For each Energy in the top five cards of your deck, you roll one die. Each heads causes 50 damage. With 18 Energy in the deck you will average 2 Energy in the top 5 cards; and if one of the two rolls is heads you will have done 50 damage for no energy. Octillery is best used early game when there is still a lot of Energy in your deck, or late game, after playing the Night Maintenances. Late game, when your deck is low, putting 6 Energy back into the deck will really increase the percentage of Energy cards in the top 5 cards. Imagine having a chance to roll 3-5 times for 50 damage each heads!

Octillery’s other attack works well with Shiftry. If you happen to get Octillery powered up for Octazooka, and can then switch or retreat for Shiftry, your opponent’s attacks are again rendered useless. As long as your opponent’s Pokémon remains active after the Octazooka attack, and you have Shifty active, they will always roll tails, and their attack will do nothing. This is not a main strategy of the deck as it is kind of hard to pull off, but its good to know about.

Evolving Shiftry is the key to success. Octillery can stall for no Energy while you power up Shiftry. If you draw it early, use TS-1 on Octillery or Honchkrow to search for an evolution card and evolve Seedot-Nuzleaf-Shifty. If at all possible, keep them on the Bench until powered up. Broken Time Space can be used mid to late game for last minute evolutions. Bebe’s, Rosanne’s and Luxury Ball are all to help make sure you can get the Pokémon you need to evolve. Getting Energy will usually not be a problem, as this deck runs Energy heavy.

Keep the Cynthia’s Feelings for the turn after you have a Pokémon Knocked Out. Getting 8 cards is a great way to make a comeback. It’s important to keep setting up Shiftrys and powering them up, as the first Shiftry often gets whittled down and Knocked Out (pardon the pun). Warp Point is primarily to switch out Octillery when you have a Shiftry ready to enter the fray.

A note about Nuzleaf. Nuzleaf’s Feint Attack should not be overlooked after you evolve to Shiftry. Thirty damage to any Pokémon for 2C is an excellent attack, particularly if your opponent has an active Pokémon stuck with no Energy. That’s a great time to start sniping the weak Pokémon on the Bench, or to hit a Pokémon that you know will become a real threat when it evolves and gets powered up.

Its pretty obvious that you are not really going to want to be putting Energy on Octillery, Dugtrio or Honchkrow, as you need to get as many Shiftys powered up as possible. The Special Darks are best used on Nuzleaf/Shiftry. If you are in a bind, they can work with Honchkrow (note however that the +10 hp only works when he is attacking the active Pokémon, not sniping). If you fall behind in Prizes, Nuzleaf and Shiftry can both benefit from the Upper Energy.

I don’t own any Claydols, so I do not create decks with them as an integral part. I do recognize that, for play above League level, they are very important. A 2-2 Claydol line could easily be added in by dropping 1-1 Dugtrio and 1-1 Octillery.

Other possible variations could include:

As with my MightyMukTank deck, I’m not suggesting this is a National or World’s contender. It is, however, a very interesting deck to play that provides lots of strategic options. Whether it is Blind, Feint Attack, Conform or Seal Off – A Shiftry with Memory Berry is very versatile. 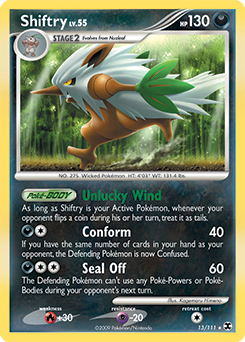