Today I have a combo for you that makes use of two cards from the newest set, Supreme Victors. These two cards are: Primeape and Chatot G.

I personally used this combo at the pre-release last weekend, and it worked wonders for me. This helped me win the game easily, however, I personally think this combo is very situational. Anyway, it is a pretty impressive combo and is absolutely amazing if you can pull it off.

SV Primeape’s first attack is “Top Drop”, for two C energy: Discard the top card from your opponent’s deck. If you discarded a Pokémon, this attack does damage equal to the HP of that Pokémon.

You may be thinking, “That isn’t very good…what if you discard the card and it’s NOT a Pokémon?” Yes, that DOES suck, you just wasted a turn. However, you cannot just base this game on luck alone. This Primeape needs a little help from…

This sort of tactic worked wonders at the pre-release. I used this combo versus a Wailord deck. My opponent had a turn 3 Wailord and proceeded to rest stall until it was fully powered up. My pre-release deck wasn’t NEARLY strong enough to deal more than 40 damage a turn, for Wailord’s first attack for 2 C energy is Rest: Remove all special conditions and 4 damage counters from Wailord and Wailord is now asleep. So I brought out Primeape and played Chatot G’s Disrupting Spy and found another Wailord in his top 4 cards, put it on top, and 1HKO’d his almost fully powered Wailord. After that, my opponent wasn’t fast enough to recover and I easily won the game.

One thing that disrupts this combo (other than the fact that there is a possibility you’d find NO Pokémon or Pokémon with low HP with Chatot’s Power) is Power Spray. Power Spray is an annoying card and is very popular with the influx of SP decks running all over the place, so keeping track of how many Power Sprays your opponent plays is crucial. This combo is a great surprise factor and most people will not see this coming. Especially not something this risky.

Let us know what you think of this combo! 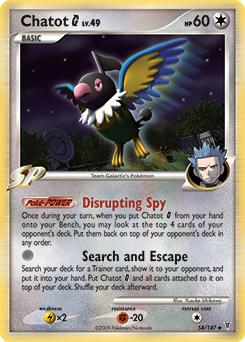