I’m not a big fan of Claydol, but I guess if you have to put him in there, take out the Uxie line due to the probable high usage of Drifblim FB.

The main point of this deck is to keep your opponent’s Pokémon asleep, and drain their HP with Darkrai G’s “Eerie Aura” Poké-Body and Drapion LV.X’s “Triple Poison” Poké-Power. Then, while you are stalling, built up your Drapion LV.X and/or Darkrai G to do some better damage.

The best Pokémon to start with would be Mewtwo. For one energy, his “Hypnoblast” attack does 10 damage and puts your opponent’s Pokémon to sleep. If your opponent is using an SP deck, level Mewtwo up for security if coin flips are going their way and they’re waking up. Froslass GL also wouldn’t be a bad start with his dragging out and putting to sleep “Sleep Inducer” attack, but unless you have Darkrai G also out, you are not going to be doing any damage. If you are stuck with neither of these two Pokémon to start, hopefully you will at least have a call energy or something to get then out quickly.

Since all of the Pokémon in this deck, except Froslass GL, are either Darkness or Psychic, and none of them have free retreat, Moonlight Stadium is a must here. It can also help you get your Level X’s out there and retreat them to the bench. If I’m going to put a Stadium into a deck, I always put in at least three so you have a better chance of drawing into them and so you can keep your opponent’s stadiums off the field.

Given that you will be putting your opponent asleep continuously, your opponent will probably be going through their TGI Poké Turns, Super Scoop Ups, Switches, and Warp Points pretty quickly if the coin flips are going at all in your favor. Getting rid of their TGI Poké Turns will lessen the impact of the popular Crobat G, and keep your opponent from picking up their damaged Pokémon SP mid/late game. If they are changing their active Pokémon with Warp Point, Switch, or maybe a Poké-Power, this can be to your advantage

Hopefully you are putting at least one damage counter on their Pokémon during the whole sleeping process, and this damage can be used later to add the sleeping effect of Darkrai G’s “Darkness Sleep” attack, or leave Pokémon vulnerable to a sniping KO by Drapion LV.X’s “Sniping Tail” attack. The other heavy attacks in this deck are Mewtwo LV.X’s “Giga Burn” for 120, and Drapion’s “Derail” for 60+ (with Special D Energy) with the added effect of discarding all special energy attached to the defending Pokémon. Also, Froslass GL can do 50 for one energy and an Energy Gain to a sleeping or poisoned Pokémon with its “Wake-Up Slap” attack.

This deck can be very effective, but it is a little on the flippy side. If you can keep your opponent’s Pokémon asleep, they won’t be able to attack you (besides with Snorlax), and that means your opponent can’t take their prizes. You can have one of the best Pokémon out there, but if it’s asleep, then there isn’t too much you can do with it.

Overall, this can be a really slow deck, and the strategy of sleep stalling can be greatly hindered by your opponent evolving and leveling up their Pokémon, or if they are just getting really lucky with coin flips. Also the Supreme Victor’s Venusaur can completely shut down this deck. Bench space can be a problem with this deck, so you should only put down what is really necessary, and only use Azelf if one of your Level X’s are prized.

Let me know what you think of this deck. Comments and criticism would be great. 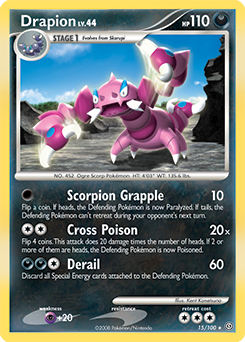