Pokémon Tools have been staples in many decks since they were first introduced to the game, back in Neo Genesis. Gold Berry, Focus Band, Memory Berry, Cessation Crystal, and most recently TGI Energy Gain and Unown’s G and Q. Relicanth SV

provides a good counter card against all the popular Pokémon Tools in the current format.

decks, as their main attacks are neutralized by Unown G’s, but Relicanth is able to take advantage of the Pokémon who have an Unown G attached and deal some important damage for a single Fighting energy. With this card, people need to be more careful about managing their Pokémon Tools in play and in their hand to keep “Grand Swell” damage to a minimum. Having only one Unown G in play on the Active Pokémon means Relicanth only does 30 damage, but a Warp Point or Cyclone Energy could allow Machamp to take an easy prize. It is this cards presence that one must work with, just as people who use Dusknoir DP know, that you rarely ever used it’s Poké-Power “Dark Palm” during a game, but it’s sole presence already limits your opponent’s playing options.

Aside from Gengar / Machamp decks, I don’t see it fittng in many other decks, as none others are hindered badly by it and usually don’t even have a single Pokémon Tool in play. Relicanth’s second attack, “Amnesia”, could prove useful in tight spots, and more specifically against the likes of Gyarados, Kingdra or Beedrill decks, whom rely on a single attack for their damage output, and specially Gyarados will have a rough time finding Super Scoop Up’s and Switches to keep retreating back and forth to get rid of “Amnesia’s” effect.

Overall this card shouldn’t see more than 2 copies being played in a single deck, but it will definitely help provide Machamp and Gengar with extra support to deal with the current heavy Unown G use.

One combo I like with this card, mainly against SP decks, is Pachirisu GE. Having both in play means your opponent is put in a tight situation. Does he/she play down all his Tools, powering up Relicanth’s “Grand Swell”? Or does he/she keep them in hand and get them discarded all together with Pachirisu’s “Smash Short” attack? This strategy could definitely work against an SP deck using TGI Energy Gain, as you could easily tell if they have such Pokémon Tool in their hand or not based on what they get with Cyrus’s Conspiracy.

Will this card become a staple in Gengar / Machamp decks? Is it really the card it needed to become a more dominant deck in the metagame? Will it have other uses in other types of decks? Is it a good counter to SP deck’s abusing TGI Energy Gain? 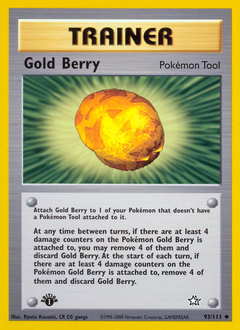