pokemon-paradijs.comThere are three ways to win a game of Pokémon cards. The first and most common one is Knocking Out six of your opponent’s Pokémon in order to take all 6 Prize cards you set out at the beginning of the match. The second way is one that was abused to no end during the 2008 – 2009 season: Benching. If your opponent doesn’t have a Benched Pokémon to replace his/her Active Pokémon when it is KO’d, then he/she automatically loses. Deck’s based on Kingdra or Machamp were usually guilty of producing ‘donk’ turn 1 wins.

The final way is a much less common way, where previous to Worlds 2009, it was an unheard of successful tactic: Decking. Once a player cannot draw 1 card from his deck during the start of his/her turn, that player loses.

“Wind Erosion” Poké-Body had never been seen before on a Pokémon Card. Cards such as Rhyperior DP tried to promote decking as a viable game winning strategy, but aside from Battle Road level events, it did not shine in the big ones.

The deck “Flygon Lock” is based on “Wind Erosion”, by locking one of your opponent’s Pokémon with a high Retreat Cost or non-threatening attacks in the Active Spot. The following sample list, used by Sebastian Crema from Canada, is the one that placed highest amongst the Master Division at the Pokémon TCG Worlds 2009 event.

pokemon-paradijs.comMemory Berry is what really makes the deck accomplish its main purpose thanks to Trapinch SW’s “Sand Tomb” attack. By using Palkia LV.X’s Poké-Power “Restructure”, and then utilizing “Sand Tomb” on an Azelf LA, or Claydol GE for example, you are effectively buying turns to let “Wind Erosion” erode away at your opponent’s deck, making it thinner by 3 cards for every turn Flygon LV.X is in the Active slot.

This combo works against pretty much any non-SP deck, as at the time of the Pokémon TCG World Championships, the decks being used included very few if any Switching cards. The most common way to try and get out of the “Wind Erosion” lock was using Super Scoop Up or attaching an Unown G to prevent “Sand Tomb” from trapping your Pokémon. The 2 Switch included in the decklist allow for less pressure on Flygon RR to always have the correct energy to free retreat your Benched Pokémon and also helps in promoting Palkia LV.X to be leveled up.

Poké-Body “Maternal Comfort” is used to support Flygon LV.X and allow it to survive for as long as possible to discard as many cards as possible from your opponent’s deck. That way, even if your opponent has powered up a Claydol and tries to chip away slowly at Flygon LV.X’s HP, you can minimize the damage dealt to it. Setting up Nidoqueen RR is not an issue in this deck, as “Restructure” allows for alot of free turns while your opponent has something Active with a high Retreat Cost.

pokemon-paradijs.comThis deck’s hardest matchup is against Pokémon SP such as Palkia G. Pokémon SP decks are both fast and can disrupt your set up with TGI Power Spray. The answer to this is the 1-1 Mewtwo LV.X tech line. Some competitors at the Pokémon TCG World Championships using Pokémon SP based decks did not use a Mewtwo LV.X counter as they considered it would not be popular enough or even do well enough to merit one. That is exactly what happened to Sebastian in his Top 16 match, where he got Mewtwo LV.X out Turn 2 both games and his opponent conceded quickly as he had no response to it.

Finally the single Bubble Coat, as explained by Sebastian, was included to help against mirror matches. I personally dislike this single card included, as without a way to guarantee it the turn you might need it, odds are you won’t have it then but it’s a minor difference in playstyle and this 1 card doesn’t affect the performance of consistency of the deck.

Along with Sebastian’s success, there were other players who used this deck effectively both at the main event and the Grinder, as several people grinded in to the main event using this particular strategy (though not this exact list). Michael Chin from the USA also performed well and got Top 32 with the deck, but unfortunately was paired with Sebastian. Nick Fotheringham from the UK got 3rd place with this strategy in Seniors as well.

pokemon-paradijs.comUnfortunately for the deck, both Garchomp C LV.X and Blaziken FB from the new Platinum: Supreme Victors set are very potent threats to this deck, disrupting it’s set up by having easy KOs on Claydol or nullifying Palkia LV.X’s “Restructure” with Blaziken FB’s “Luring Flame”. Despite this though, this could be a strong solid option for Battle Roads, as usually people are trying out new ideas, and they might not even include Mewtwo LV.X counters in their SP based decks. This could be compensated though, by making the Mewtwo LV.X line thicker perhaps, by maximizing it to a 2-2 line?

As for Stage 2 decks though, since all of them rely on Claydol, this deck should still have a huge advantage against all of them.

One final thing to note about the deck, is to make sure you play in a timely manner, as decking an opponent takes longer than KOing 6 Pokémon, and so your opponent might try to play slower if he/she is up in prizes, so make sure you have practiced enough with this deck to make your turns go quickly but without making mistakes, so you can guarantee you will be able to deck your opponent out before time runs out.

So with BR’s coming soon, can this deck still compete with the new threats from Supreme Victors? Do you think this should use a 2-2 Mewtwo LV.X line? If matchups had worked out differently, do you think this deck could have beat Steven Silvestro’s Beedrill / Luxray GL deck? Give us your opinions! 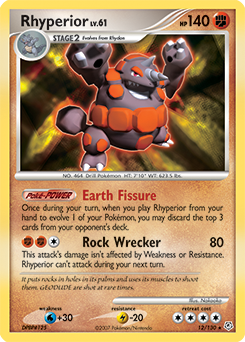