I got finally got a chance to play Pokémon cards over the weekend with Ian and quaziko. I was set on testing Gengar

variants until I could get something to work decently. I have tried a bunch of different things out, ranging from Honchrow G PL and Toxicroak G Promo to a beefed up Nidoqueen RR line and Crobat G PL with TGI Poké Turn and even Mewtwo LV.X LA, but I finally got a Machamp

list to run the way I wanted it to.

Here is the list I pretty much settled upon:

I had tried some other Machamp lists out and they are were just so incredibly clunky, but adding the Poké Drawer

really seemed to straighten things out. I have to say that I am almost definitely taking Nidoqueen out however, it is just too easy of a target for so many Pokémon out there to drag active and slow you down.

Even in games that I didn’t have Poké Drawer in the list yet, whenever I opted to get Queen out it was more of a hindrance than anything. Both Blaziken FB and Luxray GL LV.X (which are popular Pokémon cards at the moment) pull it to the Active Spot, and once it’s there, it’s kinda stuck. You have to either burn a Warp Point to free it or attack with it, but neither option is optimal.

It could be argued that getting Nidoqueen out against any deck that uses those Pokémon is a misplay, but I really think those cards are going to see so much play that it isn’t worth using Nidoqueen at this time.

In any matter, I would take it out for a 3rd Warp Point and either a Cynthia’s Feelings, Machamp LV.X, or maybe even a Mankey SV. Warp Point is awesome to get easy prizes with Machamp and to also switch it out of the Active Spot after getting a Knock Out (your opponent will most likely promote a Pokémon with Unown G attached).

This is one of my top options for Battle Roads this upcoming weekend, not necessarily because I think it’s the best play at the moment, but because 1. I have not tested SP decks enough to be at all confident in a mirror match and 2. I don’t have all the Pokémon cards to build certain SP variants. Something like this will give me the best chance to win.

I will try to test out Gyarados SF in the next day or two and post my results from working with it. I also consider it a nice option because it seems fast and consistent, which are two key attributes I look for in decks.

One other card I would like to eventually try with Gengar is Starmie SF, but I doubt I will have sufficient time to test it before Battle Roads this weekend.

So what do you guys think of my list? I know it’s hands down better than this first list I tried, but do you have any other suggestions? Let me know and thanks for reading! 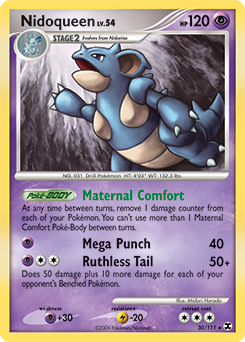