When building a deck, everyone has their own personal preferences and style. Some like full consistency, others like to play more ‘greater risk, greater reward’ cards, but in general we all find that you sometimes just need to add Pokémon cards to your deck that will get you other cards as well that you can’t directly search for. We primarily go to supporting lines such as Claydol GE

that help out with their Poké-Powers, and prefer to dedicate our Supporters to direct searching cards such as Bebe’s Search or Roseanne’s Research.

But there comes a point where your Claydol GE line is as big as your deck/bench space will allow, and you already maxed out Bebe’s Search and Roseanne’s Research. This is when deckbuilders must consider other options such as Cynthia’s Feelings, which is effective but very situational.

, and I did too before I saw that most Japanese players used this card in their decks. I started to ponder on the reasoning behind this and I have come to the conclusion that I will present to you now.

Underground Expedition excels above the cards I mentioned above because it is not situational. Looker’s Investigation could be a dead card if you have a good hand already, or if your opponent is drawing dead. Professor Oak’s Visit and Volkner’s Philosophy have you get rid of a card, which you sometimes can’t afford, and finally you will be hard-pressed to use Buck’s Training if you need to save that extra 10 damage for later on. Underground Expedition let’s you pick 2 cards freely, without any drawbacks or conditions previous to or after playing it down as your Supporter card for the turn.

Underground Expedition also offers another great thing that the others don’t, and that is choice. Being able to choose between cards is amazing, as there are no restrictions on the cards you may choose from the 4 you get to see. You may argue: ‘but Prof. Oak’s Visit gets you one more card!’. Well that is true, but the net gain of both cards is +2, as Professor Oak’s Visit forces you to return a card to the bottom of your deck, but it might be the option to be able to choose from a 4th card that defines a game.

Finally, the bottom vs top argument is futile, as if your deck is sufficiently randomized and you have no previous knowledge on how it is currently stacked, then either the top or the bottom offer the same probabilities of the card or cards you need being there for you to take. And this also combos with Uxie LA, as you could potentially get it back and reuse it to fetch even more cards. I personally will be using this card a lot more in my decks.

So what do you think of Underground Expedition? Had you considered it before as an option in your decks? Is it a good combo card with Uxie LA? 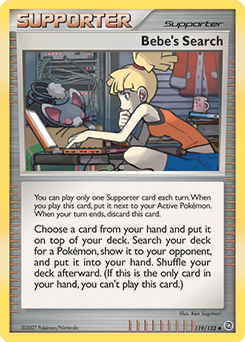