I have seen this Pokémon card being used a notable amount at Battle Roads, even though I never really considered it to be a legitimate option when it was released. However, after seeing it being used a few different ways, I think that Garchomp

may be a playable card.

The main draw to this Pokémon is “Speed Impact”. 120 damage for 3 Energy is pretty gnarly, even though though this damage can be limited. Its “Dragon Intimidation” Pokémon Body aids the attack, but it is not a huge factor into the success of the card in my opinion.

I feel the best way to use Garchomp is to attack your opponent’s Pokémon that have little to no Energy attached to them, so that you will always get a Knock Out. Your opponent’s active Pokémon will almost always have Energy attached, but their benched Pokémon are less apped to have that benefit.

One Garchomp variant I saw at Battle Roads utilized Luxray GL LV.X in order to pull up Energy-less benched Pokémon via “Bright Look” to get 1HKOs. It was a pretty cool strategy. I think that this same effect could also be achieved by simply playing Warp Points, Cyclone Energy, and/or Infernape 4 LV.X RR

is another Pokémon that can pick on your opponent’s bench too.

The only problem with this strategy is that you will not be damaging your opponent’s active Pokémon, which will be free to attack for its maximum every turn if you take that strategy. Fortunately Garchomp has 130 HP, so it should be able to withstand two attacks from most Pokémon.

Garchomp uses C Energy, so using Upper Energy is a no brainer. This gives it some comeback ability if your opponent gets ahead in prizes (which they probably will early on). You can also use any other support Pokémon you want with it because of this fact; you can throw any type of Energy in the deck.

I would probably use Garchomp LV.X MD

with it too. “Restore” is one of those attacks that allows for a lot of creativity. I can’t think of anything of the top of my head, but I am sure there are some cool combos you could pull of with it.

Finally, as for some techs to use with Garchomp, Nidoqueen RR could be good to keep Garchomp on the field longer. Dusknoir DP could be used to “Dark Palm” away any Pokémon your opponent is attaching Energy to. Metagross SV would make it easier to get knock outs, but it would also make you more vulnerable to being Knocked Out. Weavile SW is one last option, as it can give you an increase in damage output via D Energies.

I actually think Nidoking RR could be a decent option as well. “Territoriality” will put 2 damage counters on the defending Pokémon when it attacks you, and “Dragon Intimidation” will send an energy to your opponent’s hand, so that is a 40 damage swing in your favor. That should be enough to get around the fact that it can be difficult to Knock Out your opponent’s active Pokémon in one shot. Nidoking also somewhat combos with “Guard Claw”. It does kinda stink that a lot of Pokémon have 130 HP right now though, which is 10 damage too much for Garchomp. I suppose that is more reason to play the Level X.

What do you think of Garchomp SV? Have you thought of any other cool ways to use the card? Let me know. :) 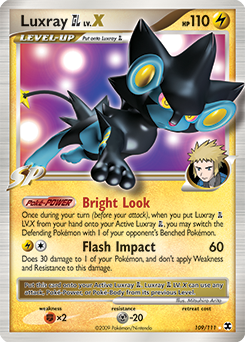