This is in my opinion one of the gnarliest Pokémon cards that came out in Supreme Victors. It’s attack and Pokémon Power are both just killer. “Dragon Rush” can take out Claydols and will snag you a prize nearly every time you use the attack. “Healing Breath” heals all your Pokémon SP in play, which again is awesome.

. First, you want to make sure you have a Bronzong G, Luxray GL, and Garchomp C in play. The most likely scenario is that you will first Level Up to Luxray GL LV.X, use “Bright Look”, attach an Energy and TGI Energy Gain

, and Knock something Out.

The following turn, if Luxray is not Knocked Out, you will first move the Energy off Luxray to Garchomp on the bench via Bronzong’s Pokémon Power, retreat for Garchomp (or TGI Poké Turn), Level Up to Garchomp C LV.X (which will heal Luxray and Bronzong in the process), attach an Energy for your turn, attach TGI Energy gain, and attack with “Dragon Rush” for another Knock Out.

The next turn, retreat for Luxray, rinse and repeat. You can draw prizes extremely quickly using this strategy. If your opponent is not able to 1HKO you, you will be able to heal yourself every other turn, making it nearly impossible for you opponent to draw any prizes.

The best way to play Garchomp C LV.X is by using a 2/2 line if you can fit it in. That way you do not have to play TGI Poké Turn on it (if you were playing a 3/1 line) to use “Healing Breath” and attack again.

However, Garchomp can fit into any Pokémon SP deck, so even a 1/1 line can be effective. Its healing ability and sniping prowess make it a true force. There are so many Pokémon cards out there that only have 70 or 80 HP (Uxie, Azelf, Chatot, Claydol, basics, stage 1’s, a few Pokémon SP that aren’t Leveled Up, etc…), so you are almost guaranteed a prize every time you use “Dragon Rush”. I think that’s really good. If you haven’t tried Garchomp out yet, give it a shot! 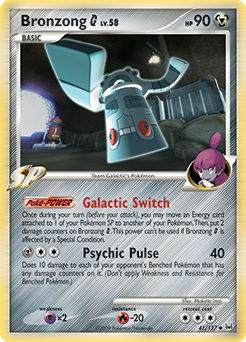