Another set has rolled around, and this one has only one word in it’s name: Arceus. There were a fair few amount of cards in this set to be hyped, but one of the cards to receive the most generous amount of love was Salamence LV.X. And it’s easy to see why, isn’t it? Taking double prizes is always an incredible feat, especially when you’re already sporting a high damage output from the start to begin with.

But is it really worth all the attention it’s been getting? Will this card turn out like another Raichu LV.X, in that it will be hyped beyond measure, and turn out to be binder candy after all? Well, that’s what we’re here to find out today.

So, we take a gander at Salamence LV.X’s base stats. 160 HP is a very good total, making it fairly tough to one shot unless there are specific techs involved. It’s Colorless (Dragon) typing is both a gift and a curse, as it allows Salamence LV.X to easily one shot Flygon LV.X RR and Garchomp C LV.X SV, but it allows them to retaliate with a one shot of their own due to its own Colorless weakness. I have always been a firm believer in the philosophy that “If it has wings and it flies, it should have free retreat”. Sadly, Salamence LV.X must pay a fairly hefty 2 Energy to retreat. A fighting resistance isn’t one that’s likely to see a lot of use, due to the declining popularity of Machamp, and a lot of Fighting type Pokémon having attacks that are unaffected by resistance, anyway, but it’s better than none.

As for the power, if you couldn’t read it in the scan, the exact wording is “Once per turn, when you put Salamence LV.X from your hand onto your Active Salamence, you may use this power. For each of your opponent’s Pokémon that is Knocked Out by damage from Salamence’s attacks this turn, take 1 more Prize card.” First thing to note is the obvious, which is that it’s only usable for one turn, so it would be best to make it count. Second, is to see that is has to go from your hand, to your Active Salamence. This means little tricks like Level Max or Porygon Z promo’s Learning attack will not activate the power (Actually, this one wouldn’t matter. Even if the power did activate, you already attacked, so that ends your turn before Salamence gets a chance to attack.). Third, it does not say that the Pokémon being KO’d for 2 Prizes has to be Active, so keep in mind Salamence’s bench hitting potential. It’s attack is one of your generic high cost, high damage, discard an Energy attacks. Nothing to go into explicit detail over, but it’s very good in it’s own right.

Now, as we will start moving down the line of Salamence that can be used. Salamence is one of those Pokémon that seems to be favored by PUI, so there are a decent amount to choose from. They all have the same statistics all around, with 140 HP, +30 weakness to colorless, -20 resistance to Fighting, and the SW and SF Salamences have 3 Retreat, while the AR Salamence only has 2. The +30 weakness is actually a bigger boon than most would think, since there are all the Colorless techs running around for Flygon-countering purposes.

Going in order of sets, we have Salamence SW. It has no Power or Body, unlike the other two, but it has the best attack in my opinion. First it has Direct Hit, which does 50 damage. Always. Regardless of whether they are resistant to you (Gengar), weak against you (Flygon), holding a tool/Energy that messes with the damage done (Buffer Piece/Special Metal), or have some kind of Agility effect going on (Flygon again, along with Dusknoir SF #1 and a few others I’m sure I’m forgetting). In my books, that’s completely worth giving up the shot at Weakness. SW’s second attack, however is even more enticing. “Dragon Finish” lets you discard two basic Fire or Water Energy. If you discard two Fire, you can do 100 to the Active.

However, and this is the good stuff, if you discard two Water Energy, then you can do 100 to any of their Benched Pokémon. You know that Pokémon with the Expert Belt they were trying to hide on their bench to give Nidoqueen RR a chance to heal it? It won’t be healed, unfortunately, and you’ll take not one, not even 2, but 3 Prizes. The thing that sets this one Salamence above the rest attack-wise is that even if you don’t target an Expert Belt wielding Pokémon, you can still take out key support Pokémon like Claydol GE. This is the guy that virtually guarantees you take 2 Prizes for the attack, but it is the hardest to get out. See, Dragon Finish takes 2 Fire and 2 Water to use, so there is no Upper Energy shenanigans, and no Call Energy to be seen. You would have to rely heavily on some form of Energy acceleration to get this out evenly.

Salamence SF, however, comes with a Poké-Body. If there is a Pokémon on your opponent’s side of the field with at least 120 maximum HP, then you get to ignore the C Energy requirements for it’s attacks. Considering all the Stage 2 Pokémon running around, with even Gengar, who normally falls short at 110, receiving a LV.X, it’s fairly easy to set it off. And even if your opponent is running some kind of SP toolbox where the highest HP is Luxray LV.X’s 110, you could tech your own Snowpoint Temple to boost it and get your own attacks quickly. The setback here, though, is that Salamence SF’s power attack, Steam Twister, requires two different types of Energy to be discarded. This makes it very hard to pull off successive hits, due to your draining yourself of all Energy every turn.

The newest gem in the Salamence fan’s collection would be the AR incarnation, with a power that provides literal Energy acceleration. Top Accelerator lets you look at the top card of your deck, and if it is a basic Energy, you can attach it to a Pokémon. Delcatty PL lets you replace the Energy on top of your deck from your discard pile, so you can be sure you always have an Energy on top. Running a build based on this would tend to have some consistency issues, though, since in my testing it seems like I get more bad starts than good ones.

But then, I’ve said that about some of my tournament winning decklists, too, so even I don’t trust my own words there. Attack-wise, Salamence AR is the only one of the 3 Salamence that lets you attack two Pokémon at the same time, thus opening the possibility for 4 Prizes in a single attack. That attack takes 3 Energy, though, which is more than any of the others require to attack (SW needing 2 and SF needing 1 if the Body is activated and 2 if not). Dragon Claw isn’t worth it. Just forget it exists, and 999 out of 1000 games you’ll never realize it was even there.

So, in conclusion to this brief(-ish) article, Salamence is a card that’s got more going on under the surface than one would think just glancing at it. I, for one, wasn’t very impressed when I first saw the translations for it, but as I got to thinking about it, it grew on me somewhat. The way I see it, this card can either destroy your opponent very easily, or epically fail in the way that people will be talking about you behind your back for weeks. I guess only time and a lot of serious play testing will tell. 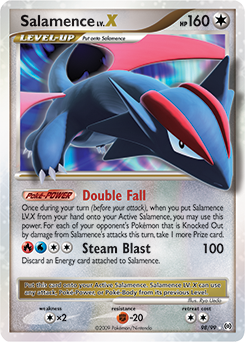