I think that it may become necessary to tech stalling Pokémon into decks for the upcoming City Championships. There are many quick decks out there, so the need to be able to buy yourself an extra turn or two to set up can be invaluable.

The two best cards to be able to do this, in my opinion, are Mr. Mime MT and Shuckle SW. Mr. Mime requires that your opponent have at least 3 Energy cards attached in order to damage it. When it is evolved from Mime Jr. (or has an Unown G attached), it will also prevent effects of attacks. This can cause some major issues for a few of the more popular decks out there.

Gyarados in particular is hurt fairly badly by Mr. Mime. Gyarados will seldom play more than 7 or 8 Energy total, which makes it difficult to ever take out the Mimester. However, Gyarados will typically play cards that push your active Pokémon to the bench, namely Warp Point, Cyclone Energy, Infernape 4 LV.X, and Regice LA.

What I think is the best strategy to use here is to keep Mr. Mime on your bench, so that when your opponent tries to switch your active Pokémon to the bench to get an easy prize, you can just send up Mr. Mime and prevent them from doing so. They may be able to then use Regice to send Mr. Mime back, but then you could just send whatever Pokémon you had active back out, and if they tried to send it to the bench in the first place, they probably weren’t able to Knock it Out and won’t be able to now.

One deck in particular that can really benefit from Mr. Mime is Flygon / Machamp. Gyarados has the ability to beat the deck, but with Mr. Mime I honestly don’t see any way it can win the matchup. Basically any deck that has a questionable matchup against the water dragon, put 1 Mr. Mime in and you should be able to beat it.

Mr. Mime can also stifle the offensive attacks of Pokémon such as Kingdra, Machamp (if you evolved of have a G attached), Beedrill, Pokémon SP, and more. It really can give you an extra turn against a lot of decks. You might want to try using Unown Q with it, so that you do not have to discard an Energy every time you retreat it.

The other potential staller that you may be able to benefit from is Shuckle SW. Shuckle prevents all of attacks, including damage, done to it by Pokémon that have Special Energy cards attached to it. This is pretty good at the moment because some decks are playing a lot of Special Energies.

Gyarados again can be hurt pretty badly by Shuckle. Flygon decks do not play many Basic Energy either. You may have to put an Unown G on to prevent Machamp from Knocking it Out for 1 Fighting, but in order to attack with Flygon they are more than likely going to attach a Special Energy.

I am not saying that these two cards can totally turn bad matchups around, but I do think they can be used strategically to give you a slight edge. Maybe even in just mirror matches, they could be used effectively.

One final card I think deserves some mention is Mesprit LA. It is not a straight up stall Pokémon, but it can shut your opponent down for one turn. This again can be a huge swing, especially in a close game. The actions during one specific turn are often what can decide a game. If your opponent is extremely reliant on Pokémon Powers, time this card correctly and it could be the key to victory.

Thanks for reading! Do you guys think these stalling Pokémon will have any effect during City Championships, or are they non-factors? I will try to test all 3 out this weekend and see if they make any difference. 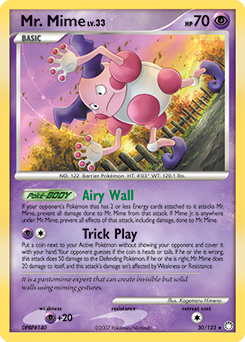