With all of the talk lately about the impact of Salamence LV.X on Salamence decks, and whether or not they are now a viable contender, I thought I would write an article to give my two cents on the issue.

This article will include:

1. First, a quick history of my involvement with the game. I originally started playing the Pokémon Trading Card game when it was first released and Pokémon hysteria was at its peak. I played tournaments and leagues for about two years, then gave it all up during my early teens when image meant more than having a good time. Flash forward close to ten years and I’m just out of college. My buddies have recently started playing Pokémon and it’s peaked my interested. Long story short, they tossed some Energy, a T/S/S line, and the Salamence SW Evolution at me and I was hooked.

2. Now lets take a look at the main cards in the deck.

Taking a quick look at these cards you see that you have a high HP Colorless Pokémon, powerful attacks with a discard, a high Retreat Cost, the possibility to take multiple Prize cards for one Knock Out, and a relatively cheap “Rage” attack using Memory Berry. This is a high risk/cost, high reward deck and can be made to payoff greatly.

3. I’ve been playing Salamence variants since I got back into Pokémon, but heavily over the past 4 months or so. I was highly anticipating the LV.X’s release and had built a version to run without it, but also had one ready to go weeks before, simply needing to slide a Level X into a sleeve. The version I was running without the LV.X took a lot of play testing to make competitive, but started to be competitive around the time Fall 09 Battle Roads began. I played it in a few leagues as well as some local Level X tournaments and never went worse than 3-2. I actually pulled off a win at the one local tournament, netting myself a few boosters and a DP Empoleon LV.X for the binder.

It was relatively consistent, but the T/S/S line was off and it was under tech’d . The strategy of this deck was to get a turn two Salamence hitting for 50 with two Energies or 50 for one R Energy, possibly 120 for 1 R Energy and 1 W Energy, and discarding with the “Battle Rush” Poké-Body engaged. With 140 HP you could do this for some time, while charging up a second Salamence, either SF version if “Battle Rush” was working or the SW version to snipe the Bench.

Once your Active Salamence had some damage on it you could attach a Memory Berry and “Rage” for 10+ damage for 2 Energy or for free with “Battle Rush” engaged. It was a relatively straightforward deck. PlusPowers could be used early to give you that extra damage to Knock Out 60 hp Basics, or anytime to get to the magic numbers of 130 or 140 damage, when facing high HP Pokémon. This deck worked very well against most other Stage 2 deck’s and gave you close to an even shot at Beedrill, Gyarados, and Gengar.

It struggled, though, against SP variants that hindered it’s set-up, but would run through others which focused on spread or simply could not slow down its set-up. I knew this deck was nowhere near perfected, but with the LV.X arriving in less than a month, I shifted my attention to a decklist built around Salamence LV.X and its “Double Fall” Poké-Power.

The original list I created again was relatively consistent, but being straight Salamence lacked any real tricks to help swing bad matchups my way. With that in mind, I did my most recent tweaking and this is my current decklist. This list, as you will see, is what I’ve come to see as a solid core for any Stormfront based Salamence Deck, and can be tech’d for your meta or playing style relatively easily. I have also built an Arceus Salamence deck based on Energy acceleration, however, I feel in the current format SF Salamence is the best play.

My list is as follows (my core cards highlighted in bold, the rest could potentially be switched for similar cards or a different strategy.:

I’ll start at the bottom and work my way up the list, with an explanation for each card. Starting with the Energy, I have tried between 12-16 energy and settled in the middle for most consistency. This leaves me with rarely missing an Energy drop, but also not having more than one or two Energy clogging up my hand. I run more R Energy than W Energy because you need that R Energy first for “Combustion” and can usually wait, if you need to, for that W Energy to show. I’m not a fan of running Call Energy in this deck, but it’s really a personal preference. I’ve tried it and it gives more consistent starts, but it also often leaves you missing the right combination of Energy, to use the moves you need to use, at the right times.

Moving on to the Trainers/Supporters/Stadiums line, you start off with the search staples Bebe’s Search and Roseanne’s Research. I run 3 and 3 because I usually get what I need when I need it and VS Seeker can provide a fourth of either, while freeing up a space in the deck. Next are 4 Rare Candy, which are a necessity in any Stage 2 deck, so that you can get Salamence out in a timely fashion.

The Memory Berry are there so that you can “Rage” with Salamence using Bagon SW. This can be epic with 140-160 HP to work with, and also can surprise some people after discarding Energies, since it only costs two C Energy, or can be done for free with “Battle Rush” engaged. Finally the real core to using Salamence LV.X is the Pokémon search/recycle trainer engine of Night Maintenance, Pokémon Rescue, Premier Ball, and Luxury Ball. These cards allow you to often use Salamence LV.X on all three of your Salamence and Knock Out only three Pokémon for the win. That essentially is the real strategy of the deck, take a quick double prize and then continue to take 2 Prizes for every one your opponent takes.

Finally, the core Pokémon line is Salamence LV.X from Arceus, 2 Salamence SF, 1 Salamence SW, Shelgon (SW or SF), Bagon SW, 1 Tech Stage 2, 1 Tech Basic, Claydol GE, and Azelf LA. The Salamence line is the meat of the deck. SF Salamence can hit big and quickly to the Active, and SW Salamence can take care of some big sniping. The LV.X allows you to often take double prizes, to cut the Energy discard amount, and boosts HP to a healthy 160. However, watch out for that double colorless weakness.

Claydol is your draw/cycle engine, while Azelf helps retrieve important prized cards. Finally there is room in this deck for one 1-0-1 tech line. This can be used, however you see fit, to give you an advantage in your metagame. A few of note are: Nidoqueen from Rising Rivals can be used to heal in between turns, Nidoking from RR can stack damage on your opponent when they attack your Active, allowing you to 1HKO just about anything with “Steam Twister”. Exploud Supreme Victors can remove all of your Pokémon’s weakness, and finally Dusknoir from DP can be used to shrink your opponent’s Bench. If played at the right moment, it can cripple their set-up or shuffle away a back-up hitter.

The rest of the cards in this deck can potentially be changed around. Most of them are tech’d in as hand refresh cards, such as Chatot MD and potentially Looker’s Investigation, or serve a dedicated role like Looker’s Investigation’s role in checking your opponent’s hand if they are running SP, to try and make sure they do not have a “Power Spray” to stop “Double Take”. These cards are essentially flexible spots to shape the deck to your style.

This essentially has been the deck that has worked out very well for me. It’s consistent, powerful, and has some tricks up its sleeve. With the added advantages of the Level X. Salamence, it may be a powerhouse ready for the big stage. No matter what its eventual role in the metagame, it definitely is a deck worth playing around with and giving a shot.

Thanks for reading, hope you enjoyed and maybe I swayed you to take a look at Salamence! 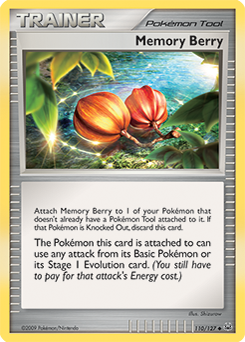