Upon making a deck that revolves around the lovely Gengar LV.X, from the Platinum: Arceus expansion, I decided that I could not let this cute little bundle of joy stand alone! The biggest need that Gengar LV.X requires is already-damaged enemies; and what way to give him that other than his best buddy, Gallade E4 LV.X! Opening up the game with a damage counter on each of my opponent’s Pokémon using “Blade Storm”, I can immediately Poké Turn out Gallade E4 LV.X and rush in my Gengar. I then throw on his LV.X, if I have not Level Maxed him already, and “Compound Pain” my opponent.

To get this all to work, I start out stalling with Gastly from Stormfront, using its “Pitch-Dark” attack, and Ampharos with its “Jamming” Poké-Body, while drawing out the deck with Uxies, Uxie LV.X, and Claydol, along with the various Trainers and Supporters. My opponent would only be left with a choice of using their one Supporter each turn (which with Ampharos in play would do 10 damage each of their Pokémon), thus giving Gengar LV.X another head start.

All this time I am stalling with Gastly’s Energy-free attack, “Pitch-Dark”, I would be building up another Gastly into Gengar, via Rare Candy, as well as having a Gallade E4 ready to enter the battle, to Level Up and deal that wondrous extra 10 damage to each of my opponent’s Pokémon. Then, once Gallade E4 LV.X has done his job, I would Poké Turn him and bring out Gengar.

Of course, Gengar LV.X would not be using just his “Compound Pain” attack, but also his lower level’s “Shadow Room” attack, to Knock Out those pesky Poké-Power techs that my opponent may have stocked up on, over the duration of the game.

This is a medium-quick paced deck and should start dealing out some heavy damage around turn 3 or 4, possibly sooner if you work it right.

Gallade E4 also works as a light hitter with his 2 Energy attack “Chop Up”, not only hitting the Defending Pokémon for 20 damage, but also hitting my opponent’s Benched Pokémon for 10 damage each. Just another up for Gengar LV.X.

Now, a big flaw here is Nidoqueen. And when it comes to Nidoqueen, it makes me wonder if I should take out the Mareep and Ampharos in order to run Duskull and Dusknoir from Diamond & Pearl, for his “Dark Palm” Poké-Power, to knock Nidoqueen back in to my opponent’s deck. I, personally, would stay with Ampharos for the lock-up on Trainers and Supporters. Some may think differently though. That’s why we build around the play styles we like. 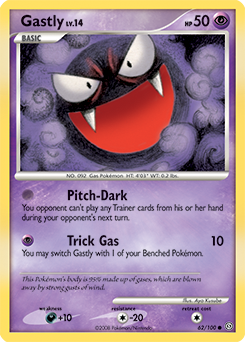