When Platinum Arceus came out, I immediately recognized that Gengar LV.X was good with Gengar PA with Curse. I then tested a deck that contained a Nido Queen and King which both aid Gengar. Nidoqueen is mainly for healing Gengar LV.X and Nidoking is for damaging your opponent’s attackers.

The strategy is to get a Nidoking out, 2 Gengars, 1 with Curse and the other either the SF one or the other PA one, your choice, and finally a Gengar LV.X. This is the main goal for turns 4-5. Then you can start moving damage around and doing more with both “Compound Pain” and “Territoriality”. This will do 50 a turn to the active (if it has damage when using Compound Pain), and 30 to each bench that has damage.

This will spread very easily and you just use Curse to get damage to Pokémon without damage. Then you will try to get Nidoqueen out to heal your Pokémon so that your Gengars aren’t Knocked Out as easily. Also, you will try to get a Uxie LV.X out to get some “Trade-Off” going, as this just acts as a Pokédex Handy 910 every turn.

Now, you may think this deck will get destroyed by a SP deck but that is not true because in my version, I tech in a Spiritomb PA to stop the opponent and help myself set-up.

Alternative techs for this deck include:

The Decklist (Everybody loves this part!)

This is the decklist I have been testing and it has done well against the following decks:

I have played 2 games with each one and the Gengar and Nidoking deck went 5 for 6 only losing to Queengar once. The Queengar list I used was Jason Marinez’s list by the way.

Well, please post suggestions on how I could improve this deck. Thanks! 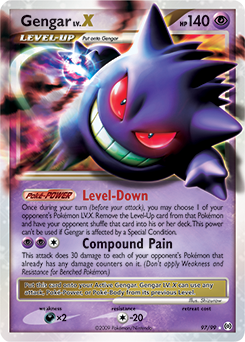