In the past couple of weeks I’ve noticed a surge in the popularity of decks built about Shuppet PL. There have been a couple of articles on 6P that display the merits of these decks. They are fun, fairly cheap to make, and they are used to decimate popular decks that do not utilize many energies to attack with the assistance of Mr. Mime MT. These include decks based around Kingdra LA, Gengar SF, and other Shuppet decks. This was also terrible news for my Speedrill deck since the main attacker, Beedrill GE, only uses one energy for its “Band Attack.”

Before I tossed it up as an auto-loss, I remembered reading about how helpful Lumineon SF was at setting up Machamp SF. Its Poké-Power “Fin Luster” would pull a basic out of your opponent’s hand to switch with the active and then Machamp would use “Take Out.” In Shuppet decks there will always be a basic in your opponent’s hand and an open bench spot after “Fade Out” is used. This is why I decided to tech in a 1-1 line to give my Beedrills some company. However, I think this line could be helpful in many Stage 2 decks.

I’m sure there are a couple of readers that have noticed that you still need a Warp Point or a Switch in order to get Lumineon from the bench to the Active Spot so that it can then retreat for your main attacker to become active. Which may lead to some asking why not just use a Warp Point? Well there is always the chance your opponent has two Mr. Mimes in play or no other benched Pokémon. If you are reduced to using a Warp Point regardless, why not use “Fin Luster” to pull out Shuppet (your opponent’s main attacker) and take advantage of its 50 HP. Or if your active gets Knocked Out Lumineon can become active without wasting a card.

Unfortunately, like with any tech you do run the risk of starting with it. However, both Finneon SF and Lumineon have free attacks. Neither attacks are Earth-shattering, but with their free costs and a free Retreat Cost on the Stage 1, you do not have to feel stuck.

While I would probably not play Lumineon against non-Shuppet decks it could be handy in other situations like pulling out a Crobat G or any of the AMU pixies so they can’t use their Poké-Powers. This also might be good to use against Gyarados to send a Magikarp to the discard pile the right way. 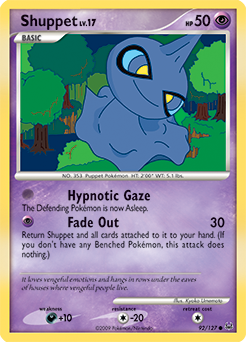