Let us go back about two years ago in Pokémon. There was a huge card pool of decks to play, yet Gardevoir dominated the game. So, we came up with what we called Sausage. This was our counter to GG. It consisted of Banette and Blissey with a wide variety of techs. The man behind this masterful deck, Jimmy Ballard ran through Nationals eventually losing to Torterra in top 16. I’m sure there is a great deal of people who can remember this deck.

This is a deck I always look back on when trying to break the meta as we call it. It is the same basic concept, do a consistent amount of damage while still keeping the game flowing in your favor. Along with a massive amount of techs to counter the metagame. So here it is my Lunatone Solrock deck.

Solrock has the same idea as Banette, ‘Luna Turn’ does 60 to a maximum of 80 with Expert Belt with a Lunatone in the discard pile and then shuffle it back into your deck. Then the GE Lunatone’s power ‘Gravity Change’ allows you to discard a card and draw a card if you have a Solrock in play. Solrock also allows you to rearrange the top 3 of your deck if Lunatone is in play. So rearrange the top and draw the one you want. Finally, the SV Lunatone’s body makes all your Solrocks and Lunatones unaffected by level X’s.

This is where Mismagius comes into the scene. I originally wanted to play Dusknoir to get around Dialga G and finally settled on the Mismagius which can shuffle an opponent’s benched Pokémon back into their deck with an attack in stead of a power. In theory without Dialga G all of their leveled up Pokémon aren’t going to be doing much as you swing for 60-80 damage.

This will hopefully force SP deck to change their original strategy. The Ditto is in there just because I think it will help against Flygon, Machamp, and Genger. If they at any point level up any of those Pokémon it could also be bad news for them. Lunatone’s ‘Gravity Wave attack does 30 damage to everything with free retreat, Gengars, Flygons, Beedrills and several Pokémon SP. This puts everything into a closer range with Solrock, especially if they KO the Lunatone for you.

I am very interested to see what everybody thinks. I want to know if you hate it, if you love the idea and why. If there is another deck you think I should be worried about let me know and if there is anything else that can be done to this deck.

I also believe this deck could only get better with the release of the next set, with the addition of Dual Ball, Trader and DCE. If anybody fells up to it, test the deck against anything and everything and let me know what you think. 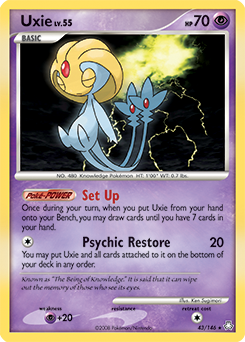