What’s up everyone? The following is a super fun deck I’ve been toying around with that revolves around the often overlooked legendary, Darkrai! After performing a Google search for a deck that involves him, I quickly realized that the poor guy simply isn’t seeing a lot of play, and the decks that I did find were certainly not competitive enough to keep up with today’s format.

So why is that? Well, first off, every Darkrai has a relatively low HP. But so what? So do SPs, and they see more play than just about anything right now. The second thing that may turn players off is that each Darkrai either has a retreat of 1 or 2. But hey, that’s why we run Moonlight Stadium, right?

The final weakness in the Darkrai family is, well, his weakness. Fighting is a fairly popular type, although Machamp and Gallade are both starting to see less play. That being said, ‘Champ Knocks Out a non guarded Darkrai for 1 Fighting, and only needs to flip 2 heads to 1HKO with Hurricane Punch, and Gallade can 1HKO without even having to flip prizes.

Now that we have gotten past the negatives toward Darkrai, let’s talk about the positive. I don’t think any other Pokémon has been designed to work so well with each other as Darkrai. Each Darkrai benefits if the defending Pokémon is asleep, and what do you know? Each Darkrai puts to sleep! Forcing your opponent to waste Warp Points and Switches early on will really help you late game. Also, Darkrai can abuse Special D Energy, essentially making each attack do 20-30 more depending on the situation.

Another great thing about Darkrai is that he combos with Cresselia, which just HAPPENS to be Machamp/Gallade’s weakness! Basically, between the Special Dark, the sleeping benefits, and Cresselia benefit, you can start dealing huge damage fairly quickly. I’ll go through a basic strategy after…

pokemon-paradijs.comThis deck has several combos and can be extremely fun to manipulate in different ways. Here is the first:

Basically, what you are going to want to do is get Darkrai LV.X up and running to switch all Dark Energy to Special D Energy, and to use Endless Darkness, essentially giving your opponent a 25% chance of waking up and a 25% chance of being Knocked Out. I like those odds! Endless Darkness will do 70 with 3 Darkness attached, an extra 20 if you leveled up from Darkrai (DP52) and have Cresselia on your bench, and if your opponent stays asleep between turns, add an extra 10 for each Darkrai G on your bench, (Yes, Darkrai G is Stackable!)

So, 90 damage with an ideal set up, add 10 or 20 with Darkrai G’s on the bench, and Crobat G if you need the extra damage. Also, Cresselia LV.X can transfer 1 damage counter a turn if you need it. If you plan out your damage carefully, you won’t have to worry about Gengar’s “Fainting Spell” because you can arrange the KO to occur from sleep damage between turns or from Crobat drops.

pokemon-paradijs.comUp to 160 damage for 3 Darkness Energy sounds pretty good, right? But that is just one way this deck deals crazy damage. A quick damage output that doesn’t involve the LV.X is also possible. Simply promote Darkrai (GE 4), drop a Darkrai (MD 3) for auto-sleep on the defending Pokémon using “Darkness Shade” (Unown can’t get around this!) and hit for 100 with “Sleep Hole” (with 2 Special D Energy). As usual, add 10 for each Darkrai G on your bench if your opponent flips tails. Also, if you level up Darkrai (GE 4) you can switch all Darkness to Special darkness for extra damage if needed.

Cresselia is here because it adds 20 damage to attacks from Darkrai (DP52), it heals from any Darkrai, and it also type trumps Darkrai’s weakness: Fighting. Cresselia has a Nidoqueen like effect, removing 1 damage counter from itself between turns, which is very important to it’s attack. for PPC, “Lunar Flight” does 80 minus 10 for each damage counter on Cresselia.

So if you can keep her free of counters, together with 2 Crobat drops or 1 Crobat drop and 1 “Full Moon Dance”, you can 1HKO that pesky Machamp or Gallade. Of course, it would be much more fun to attach an Unown G to Cresselia, hit for 90, then level up next turn and nab 2 Prizes with “Moon Skip”.

Weavile is obviously just a tech to accelerate Special Darkness energy to your benched Darkrais using “Shadow Charge”. However, with the new Charizard on the rise, Weavile can hit for a decent 80 damage with “Chip Off” for only DD, which can be helpful in a pinch. Weavile can also change your active Cresselia LV.X to darkness in order to nab 2 Prizes more easily against the ever so popular Gengar.

I prefer to use Sneasel (LA), because if you are forced to open with it, you can use “Rob” to get rid of Expert Belts in your opponents hand. This can come in handy because the average HP in this deck is low, and Expert Belt is gaining rapid popularity. (However it would be fun to take 3 Prizes with “Moon Skip”!)

Since there is only 1-of each Darkrai, and this deck depends on getting them all working together fluidly, there are a whole lot of ways to get them. Call Energy. Roseanne’s. Great Ball. Dusk Ball. Premier Ball. Luxury Ball. Bebe’s. Bottom line is you shouldn’t have too much trouble finding what you need, just hope you don’t get trainer locked. Moonlight Stadium ensures everyone in your deck free retreat, except Claydol, which is why… Warp Point!

Warp Point is also a great disrupter and gets you out of status conditions. Night Maintenance to fish out your KO’d Darkrais to get your engine back up and running ASAP. Cyrus to search out Pokéturn if you need to double Crobat drop for a KO. Unown G protects against Gengar, Machamp, Dusknoir, etc., same as in any deck. Uxie, Azelf and Claydol need no explanation.

This deck is very engaging, as in, it doesn’t “Play Itself” the way some decks do. You will never play the same way twice. It is relatively fast and consistent, it can guarantee 1HKOs a lot of the time, and is just plain fun.

This deck may not be able to hang with the big guys, but I’m ready to give it a the fair shot that it deserves. Thanks for reading! See you all at Cities! 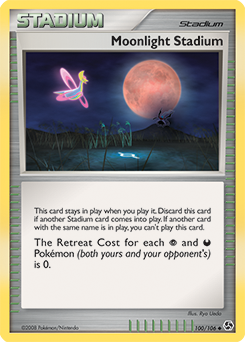