We are coming to the end of another great year, filled with many great new additions to the current TCG format. The card game has seen many new twists introduced, from Pokémon SP that allowed you to play insanely powerful monsters with great speed to a Lost Zone from where your cards can never return. However, throughout this year, there have been cards that stood out among the others, and I am taking it upon myself to honor those cards today. Let’s begin…

Most players probably never even touched this card this year, except maybe to stick it in the binder. When you really look at Kricketune paired with Dawn Stadium, though, you see it had genuine potential at it’s time. I think this little bug deserves a closer look. I believe that a Kricketune / Vileplume / Yanmega / Shaymin LV.X / Regice deck could still be a dominant force now.

Attach a G Energy to Vileplume (LA) to put the Defending Pokémon to sleep. Bebe’s Search for a Kricketune or Kricketot and use Regice (LA) to discard it along with a G Energy. Use Yanmega’s (SV) Poké-Power to attach the discarded G Energy to itself. Then, attack with whichever of Kricketune’s attacks is stronger at the moment. If you run low on G Energies, bring in Skymin LV.X (PL) and use Seed Flare to move all G Energies from Vileplume to Yanmega, then retreat for Yanmega and use a very powerful Wind Return, giving you G Energies in your hand which you can play again on Vileplume. This deck definitely deserves a chance.

Decks based around this card were common ever since its release, and they still are very powerful. More decks were built to counter this card than I have ever seen before. Some people even think that Shuppet decks originated as a counter to Flygon LV.X. Overall, this card is a very devastating card to its opponents.

This Pokémon was the ideal starter for SP decks, allowing you to search out ANY 2 of your Pokémon SP per turn. Honchkrow G was also a good starter for SP decks, but its use became limited after the first turn. Weavile, on the other hand, could survive entire games, constantly bringing in more and more Pokémon SP.This card allowed SP Decks to set up even faster than they were already capable of, leaving many other decks in the dust.

This card was widely praised before its release. It’s function as an Energy accelerator and as a main attacker earned Blastoise a good deal of attention prior to the Platinum set being released. However, once it was actually obtainable, nobody… really… played it. At all. The few players who did create decks based off of this blue turtle actually were fairly successful, but for some reason, the Blastoise bandwagon crashed pretty quickly.

Anybody who has ever played against Dialga G has endured true frustration and despair after being hit with Deafen. Still one of the best attacks today, Deafen stops you from using trainers entirely. This was extremely detrimental to Shuppet decks, but annoying for everybody. Having those Trainer cards in your hand but not being able to use them really makes for a rather unpleasant experience.

The Card That Came Too Early: Shaymin LV.X (PL)

This card was somewhat hyped before its release, but was virtually ignored afterward. It’s Poké-Body was great, but its attack, which allows you to place as many Energies from your hand as you like and did more damage when you placed more Energies, was essentially disregarded. Why? Because there was no practical way of amassing large amounts of energies in your hand quickly enough.

However, I have looked at the cards being released in Heart Gold and Soul Silver, and there is a card that makes Shaymin LV.X practical: Blissey Prime. This Pokémon has a coming-into-play Power that allows you to remove all damage counters Energies from a Pokémon and place them in your hand. Combined with Super Scoop Ups, these two could have made a dominant deck in this format. Alas, it was not so.

The Card That Came Too Late: Broken Time-Space (PL)

2009 marked the ascent of the big Basic Pokémon, mostly Pokémon SP. Stage 2 decks couldn’t compete withthese decks that were so effortlessly set up. It is unfortunate, then, that Broken Time-Space couldn’t have come in 2008, when Stage 2s were a much more common sight.

Now, I know most people would pick Luxray GL as the best LV.X, but I believe that Infernape 4 left a much more prominent mark on the TCG world. While cards like Luxray GL were being manipulated to try to gust in weak Pokémon as much as possible, Infernape 4 LV.X was able to switch the opponent’s Pokémon EVERY SINGLE TURN. Although your opponent got to choose, the general disruption which this card was able to inflict upon other decks was unmatched this year.

As all readers of this article know, SP decks have been hugely successful this year. Cyrus’s Conspiracy is the main reason why. Cyrus is a deck engine all by itself. When played in succession, it gives you constant access to the Energy and the Tools you need for an SP deck to run. In a year in which SP decks have dominated, it would be insane to leave their pivotal card off this list. Cyrus’s Conspiracy was the card this year of which you could never just run one.

And now, the moment you’ve all been waiting for…

Card of the Year: Expert Belt

A game-revolutionizing card. The abundant uses and combinations that the release of Expert Belt has opened up are only starting to be discovered. This card has transformed fading decks into tournament-worthy ones, including decks with Kingdra, Shuppet, Gyarados, and Nidoqueen. Even now we are starting to see SP decks cut back an Energy Gain or two to include this card, and this is only a month after its release! Expect to see a lot of this card used in new and unexpected ways in 2010. Although this card wasn’t given enough time to shine, it continues to change the face of TCG today.

If you think differently on any of these categories, please comment! 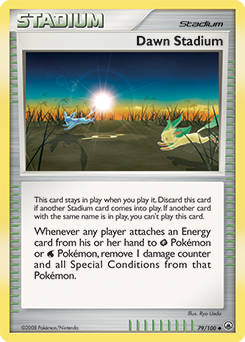