Why is it a great deck for beginners? This deck is ideal for beginners because it is cheap, easy to use, has a decklist that can be easily adjusted to accommodate a player’s available cards, and is as fast as almost any deck in the format today. A beginner can play a Scizor/Cherrim deck in a tournament, and then learn about the decks that he/she plays against. It lets the player be competitive while playing a deck that only costs around 50 bucks, while other decks cost 2 or 3 times more! In fact the most expensive cards in the deck are Roseanne’s Research and Expert Belt, which each only cost about four dollars each and can be found in Theme Decks. Scizor and Cherrim should only cost about one or two dollars each, which is great seeing as other great cards cost a lot more.

So what exactly is a Scizor/Cherrim deck? It relies on the StormFront version of both cards. Scizor is the main attacker in this deck. Scizor has two attacks, I will focus on the second attack, ”Pound Down”. For two grass energies, “Pound Down” will do 40 damage and an extra 30 damage if you do not have any “Poké-Powers” in play. So “Pound Down” can do 70 damage on the 2nd turn, while that is pretty good, there are other cards that can enhance that.

Cherrim SF has a Poké-Body named “Sunny Day”, it allows the user to do an extra 10 damage from any Grass or Fire Pokémon. What is better is that “Sunny Day” is stackable, meaning that if you have two Cherrims in play, you do an extra 20 damage, and if you have all four Cherrims in play each grass or fire pokemon does an extra 40 damage. That means that Scizor’s “Pound Down” can potentially do 110 damage for just 2 energies.

One drawback of this deck is that because Scizor’s “Pound Down” doesn’t do as much damage if there are “Poké-Powers” in play. So that means a Scizor/Cherrim deck cannot make use of Uxie and Claydol. So on one hand this fact makes this deck a lot cheaper than other decks, but on the other hand it forces the user to think of other ways to draw cards.

Trainers are vital in this deck because this deck does not have the draw power that other decks have. Trainers like Handy 910’s Pokédex, Poké Radar, and Great Ball come in handy in going through your deck and searching for Pokémon. Supporters like Volkners Philosophy, Cynthias Feelings, and Looker’s Investigation are used to draw cards. The downside of this is that cards like Gastly SF, Dialga G pt, and Spiritomb Ar can shutdown the use of trainers. So I came up with another way of drawing cards.

My Scizor/Cherrim deck is different than of builds because it makes use of Unown R from the Legends Awakened set. Unown R has a “Poké-Power” called “Retire” which lets you discard Unown R and then draw a card. This lets the user still draw cards while being in a trainer lock. Later you can use Pokémon Rescue, Night Maintenance, or Palmers Contribution to get Unown R back in your hand or deck. Why can this deck play Unown R which has a “Poké-Power” but can’t play Uxie and Claydol because they have “Poké-Powers”? This is because the “Poké-Power” “Retire” discards Unown R, leaving him off the field of play.

The only disadvantage of using Unown R is that “Retire” is a “Poké-Power” and can be canceled out by the card “Team Galactic Invention- Power Spray”. That means if your opponent uses “Power Spray”, you will have a “Poké-Power” in play, meaning that “Pound Down” will do thirty less damage. So a player will have to use discretion on when to use Unown R.

As an example, here is my current decklist.

A little explanation of why some cards are in this deck

Plulse SV- Plulse has an attack called “Greedy Draw”, which lets you draw one more card then the opponent has in his hand, and all of this for no energy. It allows you to use your opponents Claydol to help you. Chatot MD can be used instead of Plulse. Chatot doesn’t let the player draw as many cards, but it does have free retreat.

Expert Belt/PlusPower/Bucks Training- All of these cards serve the same purpose, to bump up the damage done by “Pound Down”. Expert Belt lets you do twenty more damage. PlusPower and Bucks training each lets you do ten more damage, but this effect goes away after one turn. It would be helpful to get all these card early, to get an early win, or to save these cards to use all at once to Knock Out a Pokémon with a lot of HP.

Cynthia’s Feelings- This is an excellent card that will let you shuffle your hand into your deck and draw four cards, or eight cards if one of your Pokémon had been Knocked Out last turn.

One reason that this deck is so great is that it can be adjusted to whatever cards you currently have, or whatever cards fit your playing style. I will highlight a couple of cards that are sometimes found in this deck.

Shaymin LV.X (Ground Forme)- Shaymin’s “Thankfullness” “Poké-Body” gives each Pokémon an extra 40 HP. Which means that with an Expert Belt attached, Scizor has 160 HP! This is especially helpful because Scizor’s “Poké-Body” “Honeycomb Defender” reduces the damage of each attack done to Scizor by forty damage as long as there are at least six damage counters on him. This makes Scizor somewhat of a tank. The downside of this is that to establish a benched Shaymin LV.X you will have to slow down the deck at least 1 turn.

Vespiquen SF- Vespiquen is another Pokémon that is popular to use in this deck. It is mainly used as a secondary attacker. It can do a considerable amount of damage pretty quickly, but nothing compared to Scizor. So that is why I chose to include more trainers that will establish a Scizor faster, rather than having a secondary attacker.

I promise to not go through every matchup, just to give you some pointers about facing some of the more popular decks.

This matchup can be hard, or easy depending on the decklist. If your opponent is playing Dialga G, he will try to shut down your trainers with the attack “Deafen””. So try to rely on Unown R until the opponent decides to use another attack. If your opponent is playing Lucario Gl and a fire Pokémon, you might have to scoop right away. Lucario Gl has a pokebody “Boundry Aura”, that treats all weaknesses as times two. Meaning Scizor can be Knocked Out by an attack from a Fire Pokémon that does just 50 damage. But if the SP deck is not playing Lucario Gl, you have a favorable matchup because you should be able to build “Pound Downs” damage up to 120 sooner or later to Knock Out any pokemon they are playing.

Even though I am grouping a lot of decks together as one here, Scizor/Cherrim decks should do okay against these decks. A good rule of thumb against a stage 2 deck is to set up as fast as possible, and hopefully you will be able to win the match by about turn four. If you are playing an extremely speed deck like “Shuppet” or “Uxie” hopefully you can find a BTS pretty fast to evolve your Pokémon quickly and avoid an early loss. If your opponent has a stage 2 deck with high HP Pokémon, try to save your PlusPowers and Bucks Trainings to Knock Out one Pokémon. Then you can use “Pound Down” one turn, then use his first move named “Accelerate” the next turn. “Accelerate” has a base damage of only thirty but if it Knocks Out the opposing Pokémon, Scizor is then immune to any effect of an attack including damage for one turn.

So thanks for taking the time to read my article on the Scizor/Cherrim deck. It really is a great deck that can win most local tournaments, while being very cheap. So I encourage you beginners to try to build a deck like this, and I encourage you veterans to point any new comers to this article. 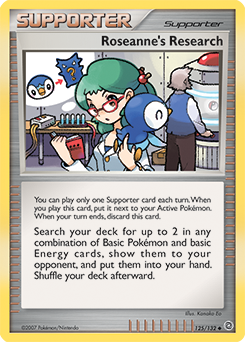