Hi everyone, my name is Tim, known as Silverwarrior on most sites. This will be my first article with 6P. I started playing Pokémon TCG back in September of 2009 as a hobby and soon became addicted. I’ve since signed up for several sites to participate in deck building and general tips and tricks but I always find myself checking 6p.com for new article updates.

To cut straight to the chase, since my start with Pokémon TCG I’ve seen a lot of decks with the concept of mass amounts of damage for little, or no energy. Such decks as Speedrill, Gyarados, and of course all the SP variants. It is always fun to try something new and since we have finished our first day of the prerelease for our new set, HeartGold & SoulSilver, I figured it would be fun to write my very first article on a fun and possibly competitive build using the cute and infamous Jumpluff from the new set! Without further ado, here is a general example of a deck I like to call “Cotton Swarm”

The Break-down:
Jumpluff GS has a very unique attack called “Mass Attack” that for the price off only 1 G Energy it will do 10 damage times the amount of all Pokémon in play, including your opponent’s! This can lead to high amounts of damage by loading your bench with basic supporters and techs. The only down side to this cute little guy is his very low HP score off only 90 for a Stage 2 Pokémon. This can be offset with the use of a card that has many non-playable cards turning out their own decks and that card is non other then Expert Belt.

Although 110 HP for a Stage 2 is still low, and the cost of another prize being taken if your opponent manages to Knock it Out is steep, the added +20 damage along with 10 more damage for having a Pokémon in play adds up very quickly.

Choices:
There are a few cards added in that may have you wondering to yourself “Why is this here?” The answer is very simple, everything has a purpose to support one another. Dunsparce, a basic little bug with 60HP that has a free attack that will let you search out a basic and play it to your bench. This comes in very handy since Jumpluff’s attack does more damage based on more Pokémon in play.

Cherrim SF adds a stack-able +10 damage to attacks from your Grass or Fire type Pokémon. This leads to +20 damage from Jumpluff’s attack just for having 1 Cherrim SF in play. My last addition to the deck was Shaymin LV.X (Skyform). I know that the land form version is probably more appealing to some, but in order to level it up without being active you would have to play Level-max. The reason behind the choice of the sky version over the added 40HP is his poke’body, “Revenge Seed“ If one of your Grass Pokémon were Knocked Out, Shaymin LV.X’s attacks will do an extra 60 damage. This is a great surprise attack when your opponent is expecting that Shaymin to level up into the one that adds +40HP.

T/S/S:
The trainers and supporters are the basics with a few exceptions. Poké’ Radar, a very un-popular card let’s you dig 5 cards down and add any Pokémon you find to your hand. This is perfect since you have so many Pokémon and evolution lines. Cynthia’s Feelings is another card that has found it’s way into my heart. This card can be great late game after you loose a Pokémon and it will deal you a fresh set of 8 cards. It’s also very handy with all the SP decks you may encounter since Claydol’s Poké Power tends to be Power Sprayed.

Palmer’s Contribution is a card I would normally not use, and instead play another Night Maintenance since it does take up a supporter for that turn, but with so many evolution lines, it’s great to be able to get back any combination of 5 Pokémon and basic energy cards for your deck.

Conclusion:
A very fun and interesting deck to play. It can deal high damage for only 1 G Energy and still has a few tricks in dire times. One of the biggest problems you’ll encounter is the easy KOs due to low HP and of course, the x2 Fire weakness. It’s not the best, but it is fun and very rewarding if you take the time to play with it. Give it a try, test it out, and have fun. 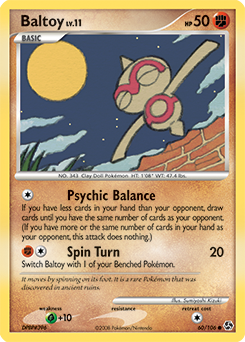