Hi everyone, my name is Gonçalo. I’m from Portugal and trying to present a new Flylock variant.

After testing a bit the deck against Expert Gyarados I decided to post it here. The list consists of the following:

First of all the main Pokémon:

The lock Pokémon, attach an Energy along with Memory Berry and the lock starts here. Attack for 10 and lock the Pokémon from retreating or switch the opponent’s Pokémon to let him discarding Energy or Trainers to retreat it.

This is the Pokémon who let you change defending Pokémon without attacking with Trapinch so you can switch and lock on one turn.

The new addition, Slowking from HS lets you reorder the top 3 cards of either players deck allowing to choose what to discard. This lets discard useful cards like Switch, warp points, Warp Energies, etc…

New addition too, if you are almost KO one Claydol or other locked Pokémon just remove 2 damage counters from him and let it be locked again and again. :)

This is a early game locker for Trainers. I think its more useful then Chatot as you can quickly evolve stage 2 Pokémon or Claydol as you lock opponent’s Trainers.

This cards will let Flygon LV.X use Trapinch attacks…that’s the objective of the deck.

The only objective of this cards is search for 3 Memory Berry as there is not any other way of searching them.

Bad hand, no starter Pokémon but one Unown G…ohhh!!

Just attach a Call Energy and search for useful Pokémon while you will can retreat with Unown G next turn. This is an example to use Call Energy on this deck. After turn 1 or 2 they are useless.

The other types of Energy are just to give retreat 0 to all Pokémon in this deck while attached to Flygon. 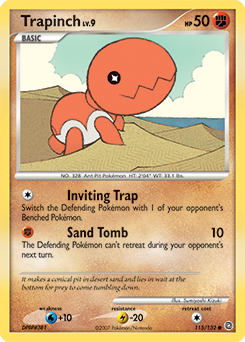