Hey everyone this is the second article I’ve submitted to 6P. This was the deck that I submitted to J-Wittz’s Double Colorless Competition. While this build utilizes Double Colorless Energies, it pretty much neglects the rest of the cards from HGSS. This is why I look forward to any constructive criticism I can get because I am thinking about maybe using this for States. Thanks for reading!

With Double Colorless Energy in the new HeartGold & SoulSilver release, Garchomp SV could be charged up by Turn 2 and doing a possible 120 damage, 140 with Expert Belt attached, to the defending Pokémon. The reason for putting in Luxray GL LV.X is to pull in your opponent’s Pokémon with its “Bright Look” Poké-Power, which is the very strategy that worked for the last deck that won Worlds in the masters division (Raybees). The idea is to pull in Pokémon that do not have (m)any energies attached for Garchomp to hit big or perhaps to bring in very weak Pokémon so that Garchomp could get away with using “Guard Claw.” However, Luxray can be quite formidable on its own. For example it might be nice to throw an Expert Belt, along with two energies, on Luxray so a Claydol is just a “Bright Look” and “Flash Impact” away from turning into a Prize card.

Reason(s) for Choosing Some Cards

Chatot can really shine with the introduction of Double Colorless Energy. Now you can use “Chatter” after just one energy drop. Chatter can be nice with all the play Spiritomb has been getting. Barring Warp Energies you could easily control the game by preventing Spiritomb from retreating. Although “Mimic” is the main reason the bird is on the list, which can help dump a bad hand.

I chose the Gible from Supreme Victors because it has the highest HP of all the available Gibles. At 60 HP it reduces the chance of getting “donked” T1 by Sableye’s “Overconfident.”

I chose the Gabite from Mysterious Treasures because it can retrieve those precious Double Colorless Energy cards back from the depths of the discard pile with its “Gather Up” attack. However, Gabite SV is a pretty close runner-up considering it has a free attack that heals all of your Pokémon, and another attack that is very similar to “Chatter” from Chatot MD.

This deck is pretty much built around Garchomp SV and its “Speed Impact” attack. It wouldn’t seem right to exclude it from the decklist.

I’ll admit Garchomp LV.X is an unnecessary luxury. It may just seem like just dangling steak for Gengar SF and Flygon LV.X. However, since it’s a luxury you can exercise some discretion before playing it. The fact that it only adds 10 more HP is somewhat of a buzz kill, but its Poké-Power “Dragon Pulse” could be game-changing. Its attack “Restore” may become necessary late in the game. It could also set up a fallen hero like Garchomp or Luxray GL, or you can get back a discarded Claydol!

I’d like to think this list is quite flexible. This could come in handy when you would try to adapt this deck to a local metagame. I chose to leave this list with beefed up lines of Luxray GL and Garchomp so there would be a good consistent starting point.

If your area has a lot of decks containing Flygon, Salamence, and Garchomp C to truly fear the colorless weakness (even though it works both ways for those examples), Exploud SV could make a good tech. Its Poké-Body “Erasing Sound” removes the weaknesses from all of your Pokémon. Not to mention that it would be another attacker that could also utilize Double Colorless Energies. The effect of discarding cards from its attack “Hyper Beam” could setup Garchomp later in the match.

Manectric from Platinum could be interesting in this. It protects your benched Pokémon from Luxray’s “Flash Impact” and it could lead to an interesting spread attacker that could coincide well with Garchomp LV.X’s “Dragon Pulse.”

Lumineon SF has a Poké-Power “Fin Luster” that can pull a basic Pokémon out of you opponent’s hand and make it active. Excluding a rare scenario, I don’t think there is a basic Pokémon that could survive “Speed Impact” without any energies attached to it. However, since Lumineon must be active to use “Fin Luster” it may be worthwhile to add Warp Energies or more switch cards.

I am aware that the two Luxray GL LV.Xs on the list make this deck an expensive endeavor. A cheaper way of going about this would be dropping all the SP stuff

for cheaper methods of pulling in Pokémon. I realize they are not quite out yet, but the new Pokémon Reversals do the same thing as “Bright Look” if you get heads. Also you could add four Poké Blower + cards in to better your chances of pulling in a benched treasure. I have to imagine it would be cheaper for everyone to obtain eight trainer cards over a mini-Cyrus engine and two copies of the most expensive Level X out there.

As I mentioned earlier the Garchomp Lx.X is a luxury. It may be better to cut it out and beef up the Garchomp line to 4-3-4 since you want to be able to get out your main attacker at all times. 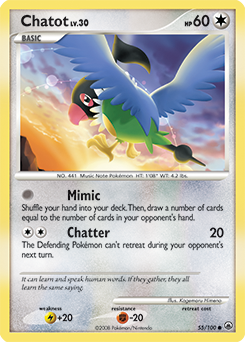