One card you should be sure not to overlook during your testing for States is Regice LA. It has been thought that this card was only useful in Gyarados for the sole purpose of discarding Magikarps, but “Regi Move” serves as a potent Pokémon Power that can swing the game in any deck’s favor.

Yes, Regice is a terrible starter if you have the misfortune drawing it as the only basic in your opening seven cards. It takes 3 Energy to both attack and retreat, meaning you will be giving away a few turns unless you are running some type of switching, like Switch, Warp Point, or Warp Energy. You will probably be running at least one of those aforementioned cards in most decks anyway, or maybe even an Unown Q MD so that you aren’t put in too bad of a bind if you open with it.

Where Regi Move really shines is in any quick hitting deck, save for SP variants. I am talking about blitzkrieg decks like Shuppet Donk, Jumpluff, Gyarados, and Machamp. These kinds of decks want to be taking a prize every single turn, if possible. They are not decks that like to slug it out; they would like to win by turn 6 if it’s possible. Regice aids these decks greatly by shewing away out gimmicky cards that your opponent may try to stall with like Mr. Mime MT, Spiritomb AR, Shuckle SW, and Shedinja SV. This set of cards tries to punish aggressive cards for the attribute that make them what they are.

You could just Warp Point or Cyclone those cards away (except for Spiritomb AR which prevents you from playing Warp Point), but the advantage Regice provides is that it is easily searchable. Roseanne’s Research, Pokémon Collector, Luxury Ball, Pokémon Communication, and Bebe’s Search are all popular trainers that all decks play and can search our instrumental ice cube.

Regi Move can be used throughout the whole game, which is another big plus. Once it’s in play, you opponent won’t be able to stall unless they are playing multiple copies of those bothersome basics in their deck.

Other than having the ability to force away stalling basics, Regice is able to coerce all Pokémon SP to the bench, too. This is super important because often times you may not be able to KO the active SP, but you will be able to KO any of their bench. Like I mentioned earlier, quick decks want to draw a prize every turn if possible, and each of your turns that end without a Knock Out, it is more likely that you will fall short in the match.

An example of where this instance might occur is if you are using Machamp SF and your opponent is playing SP, but has an Unown G attached to their active. As far as I can tell, most SP’s have been cutting down to 1 Unown G, which means Machamp will be able to Knock anything Out on your opponent’s bench for 1 Energy, except for Claydol. This makes getting Regice in play a priority, as it almost ensures a prize a turn unless your opponent plays multiple Unown G. Regice can also benefit Jumpluff against SP, as and they might Expert Belt an active making it too hard for you to Knock Out in one shot, but their bench will be prime pickings.

The two card discard Regi Move requires can be an annoyance, but it can be beneficial at times, too. Gyarados thrives on this discard. Other decks can use the discard to lower their hand in order to draw more cards with Claydol’s “Cosmic Power”. It is really not too big of an issue.

In closing, give Regice a try if you are not already using it and see if it can sway any matchups in your favor. I know it has made a big difference in my testing results. 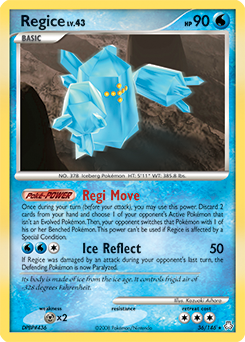