So, you’ve made it past the first couple turns. You’ve got your starter out, and you’re going for your main attacking Pokémon. This is the point where it hits you that that starter isn’t going to last forever, and that you need some way to keep setting up while actually damaging your opponent.

As far as support goes, there are a few options in the current modified format. Not all of them are widely thought of, but they can all work under different circumstances. Some of them are just bad, but hey, maybe you have some rogue that you’ve been looking for the finishing touch for. I don’t know, so I’ll just run through everything that falls under the basic definition (below) of “engine”.

What is an “engine”, you say? Well, an engine is loosely defined, by me, as any card that can be used to get other cards, normally used for setting up a main attacker or tech without requiring an attack. If it needs to attack, then that would be a starter, and there’s already a great article on that here. More often than not, two or more engines can even be used in the same deck for an extra boost in consistency.

In this article, I’m going to give you a quick summary of the Pokémon, hitting anything I deem important. Then, I’ll explain the Power of the Pokémon and why it is beneficial to the setup of a deck. Then, I’ll give the cons of using that specific card as an engine.

So, to start, I think I’ll hit the most majorly used ones.

First off, we have Claydol GE. The vast majority of us are perfectly aware of what this card is, what it does, what it looks like, how much it costs, who in our area has extras, how many eyes it has, what kind of toilet paper it uses, etc. For everyone else, Claydol is the most widely used consistency card used.

Its Poké-Power, Cosmic Power, is easily abused by almost all decks in the current format. You simply place one or two (I know it says up to, and that should include zero, but Pokémon doesn’t recognize zero as a number) cards on the bottom of your deck, and then draw cards from the top of your deck until you have six in your hand. Simple as pie.

So, to look at the cons of using this engine versus using any other engine, we have to look at its base statistics.

Uxie LA is another card that’s widely known, whether you think it’s great, think it’s underpowered, or even remember the deck built on this that was the predecessor to Shuppet PL. I know, I don’t like to think of U-donk either. This is the only engine in the list based on a Basic Pokémon (non LV.X), and it’s power is easily one of the most recognized in the game.

Setup allows you to draw cards from your deck until you have 7 cards in your hand, effectively placing you back at “setup”. Nothing overly complicated. Being a Basic Pokémon, this engine is much faster than the others, since you can easily search out a Uxie using anything from Roseanne’s Research to Budew SF’s Find a Friend. There are just an obscene amount of cards that let you put basics into your hand to be taken advantage of, so getting it isn’t any problem at all. Uxie can even use it’s attack, Psychic Restore, to save itself from a KO by placing itself back into the deck (to be used again). Uxie can also Level Up to gain twenty more HP, for a total of 90, and a new Power that works like a Pokédex, for an extra chance of getting that one crucial card.

Uxie does have its fair share of problems, though.

Next we have engines that are used in very specific types of decks. When I say “specific”, this means that you can’t just splash this in any random deck for a boost in consistency. This isn’t to say that these are inferior, just that they have a specific purpose in mind, instead of just splash-able draw. Okay? Okay.

First, we’re going to tap onto the newest engine, Ninetales from the HeartGold and SoulSilver set. So, aside from counting to see if it actually has nine tails (I counted seven…), there is one thing I noticed immediately about this card. The Power, Roast Reveal, can function as a replacement for the widely used Claydol under some circumstances.

Roast Reveal is a power that is tailor-suited to do one specific thing: Get Energy into the Discard quickly. This card is pretty much a Felicity’s Drawing every turn, as long as you’re discarding Fire Energy. Nothing overly complicated. Just a discard, then draw.

This Kyuubi (10 points to whoever gets both references) isn’t without it’s faults, however.

Now I know some of you are thinking: ” Wha… This draws you less cards than Ninetales, and you still have to discard. Are you stupid?”. My answer to that question is: I know you get less cards, and it depends on how you define stupid.

The only real advantage Bronzong has over Ninetales is that you can discard any type of Energy, instead of just Fire. The trade off for the versatility is that you get less cards for the Power. Another minor plus is that you actually draw a card, first, then decide whether you want to discard an Energy for another card. With Ninetales, if you don’t have an Energy in hand (Fire, mind you) then you’ll be stalled for a little while as far as draw goes. Bronzong lets you continue to grab another card in the hopes of hitting a Roseanne’s/Basic Energy. Then there’s the fact that you could just run Bronzong SF with it, and you’ll be able to end up with 3 new cards in your hand, one of which is an Energy, by discarding an Energy and placing one card back into your deck.

As far as cons go, most of what applies to Ninetales applies here, too, so I’ll just cut to the chase with ones that are only to Bronzong.

Two things I want you to take note of here. First, there are so many abbreviations in this name that if you understood it, you deserve credit for being bilingual. Second, this is a basic Pokémon. Sure, it’s a LV.X, but it’s a basic nonetheless. That affords a great boost in ease of using it, and since it has free retreat, it’s a great starting Pokémon, too.

Fast Call lets you search your deck for a Supporter, no strings attached. What really makes this usable is the thought that we currently have Supporters that can search for any given card in a deck outside of normal Trainer cards and Special Energy. So, while you don’t have direct draw every turn, you can just grab whatever you need, whenever you need it.

Short section on Staraptor, huh. So onto the cons.

Ah, Gardy. What could I possibly say about this that hasn’t already been said many times over, both by World’s winners, and weird basement dwellers obsessed with Pokémon to a creepy level. So, to be frank, this isn’t normally thought of as a support Pokémon. It can function as one, but it’s normally focused on offense rather than defense.

Telepass is, simply, an extra Supporter every turn. It lets you look down at what your opponent has already burned through, and simply use any Supporter you see in the Discard as the effect of the Power. This means that if your opponent uses a Bebe’s, you’ve got a Bebe’s whenever you need it. If your opponent used a Roseanne’s, you’ve got a Roseanne’s at your disposal. This can lead to very frustrating situations, since using a disruption based Supporter like Looker’s Investigation or Cyrus’s Initiative can easily mean having that card used on you every turn for the rest of the game against Gardevoir.

Rather than give a list of things that hurt Gardevoir as an offensive force, I’ll just note the only real problem Gardevoir has as far as support goes: It is a Stage 2 Pokémon. This means that while T2 offense and support is very possible in most decks, Gardevoir as an engine isn’t one to hit the field very fast, so you’ll have a few stall turns while you’re scrambling for an extra Rare Candy and Bebe’s.

The only Pokémon on the list that isn’t fully evolved is going to wrap up our list of major contending engines. Porygon 2 is kind’ve similar to Gardevoir in function, but Gardevoir is generally used more. The Digital Duck Pokémon is generally only used in the deck of its fully evolved form, Porygon-Z.

Download lets you use an extra supporter every turn. Just as long as you have another Supporter, you can use Download to get an extra search/draw. Unlike the others in the article that I’ve mentioned, this one actually is simple.

Since Porygon 2 evolves, it doesn’t have the issues that most engines have upon being dragged active. Just attach Double Colorless Energy, evolve, and continue to use Porygon-z to attack. Generally, though, Porygon-z decks tend to focus the engine on Claydol, and use the extra support of Porygon 2 as a bonus.

Cons. Yes, there are some.

Froslass AR has a Power that lets you search your deck for any one card upon evolution. Only once, and very Power Spray-able, but it’s worth a note for the game changing abilities the one card could have.

Dodrio SV and Noctowl HS both have a Power that lets you draw one card. Pretty much everything already noted in this article can do better than that.

Pidgeot FRLG is an incredible consistency booster, letting you search any card out from your deck every turn. The only problems with it are that it is a Stage 2, and that the basics/Stage 1 it evolves from are fairly weak. The major problem is that it’s been rotated already, though.

And, P.S., this article isn’t meant to be about Trainer engines. I’ll leave that to someone else, or do it myself at some point. Hopefully, someone else will do it, so we have 3 different viewpoints on the starters, Trainers, and engines. 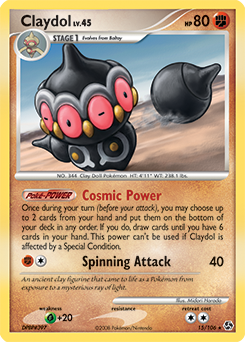