Re-creation attack, for one Psychic and two C Energy, allows you to copy an attack from one of your opponent’s Pokémon from the discard pile. It has been over 2 years since this card was released, a time when Double Rainbow Energy and Scramble Energy were popular and legal for the format. It was a complete pity and surprise Mew didn’t get a quick boost to turn the tables, as those two cards could only be attached to a evolved Pokémon.

Gardevoir, from Platinum is the first option. Assuming you would have a P Energy already in play, its “Psychic Connect” Poké-Power allows you to move said Energy onto a Mew, and simply attach a Double Colorless Energy card onto the newly coming-into-play Mew card to deal nasty surprises using your opponent’s discarded Pokémon cards!

Bronzong G, also from Platinum, is the second option. It’s Poké-Power, “Galactic Switch” have a bit of a restriction, which requires an Energy already on a Pokémon-SP in order to allows the Energy transfer from that Pokémon to another. Since both Mew, and most of the Pokémon-SP have amazing synergy being Basic Pokémon and some require Double Colorless to utilize maximum usability, it could be one heck of a force!

The only downside, that is you would need to include a P Energy or two in the deck to utilize it, but it could not be much of an issue if the list already runs P Energy due to Toxicroak G, Fighting type promo.

What table turning surprise that Mew would make against any matchups? Firstly, Mew does not need to copy the energy requirement it needs to copy the discarded Pokémon attacks, which could be amazing vs decks like Gyarados SF. Assuming you would have placed some damage on their second Gyarados, you would surprising make them cry by getting a Mew into play and use Gyarados’s ridiculously expensive attack that the opposing deck would never be able to use – Dragon Beat, for 100 damage which normally requires 2 Water and 3 C Energy. OUCH!

Another thing is, you would easily mess their strategy or comeback plans up rather badly by exploiting Gardevoir Secret Wonder’s “Psychic Lock” attack, which means, they would not be able to use their Claydols or anything to try and hit their much needed recovery cards! If a big bad threat occurs after a Gallade knockout, you could easily exploit that card to knock-out and deal big damage by using “Psycho Cut”.

There are many powerful cards in the format that Mew can easily exploit for rather huge damage, such as Gengar from Arceus or Flygon from Rising Rivals. Heck, if you are facing a Machamp deck, and have a Lucario GL in play, you would either take advantage of their discarded Machamp or Flygon to 1-shot them, allowing you to stay ahead of the match!

So many nasty table-turning tactics, but only one main downside in itself is the low 60 HP…and a common weakness. 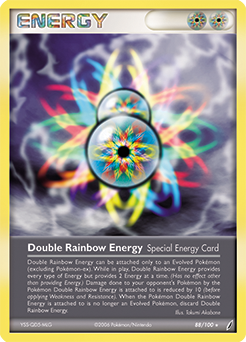