This is not going to be a standard tournament report. I’d rather focus on some of the preparations I made before the tournament, and my reflections on how things went overall – rather than a game by game account.

I went into the tournament playing a modified version of the Houndoom/Ambipom deck that I had written an article about on 6P a few months ago (Hounds and Apes). I had taken the feedback that everyone had given me and used some of it to make the deck better. Nevertheless, I was expecting that the deck was still Tier 2 and it would be an uphill battle on the day. We played 7 rounds of Swiss, and after losing my first two games, I went on to post a 3 and 4 record. Of the 4 losses, I really felt that two of them could have gone my way. I’ve only been playing for a little over a year and this was my first big tournament, so I was pleased with that record.

Before going into the tournament I had done quite a bit of research about the top decks and what I might expect. With that in mind I teched some things into my deck to try and provide counters to some of the problem Pokémon I expected to face. Mr. Mime went in to hold off Gyarados and Shedinja went in to counter some of the big hitters that use Poké-Powers and Poké-Bodies. I also put in Skuntank G as a way to KO Gengar without invoking “Fainting Spell”.

Although I did not end up facing any Gyarados or Gengar versions that ran the SF Gengar, I was quite pleased with how well those three techs worked, both during the tournament and in some friendly side matches. I did play and beat Gyarados once, and a second battle, against a different player, went down to whether his last Energy was his last Prize card or the last card in his deck – too bad for me it was the last card in his deck and he KO’d my Mr.. Mime).

Ironically, one of the tech cards I had taken out, Bench Shield, could have really helped against two tough matches I had – one versus LuxChomp (“Dragon Rush”) and the other versus the sniping Gengar. Overall I was very satisfied with plans to counter the metagame. The other concern I had going into the tournament was Turn 1 KOs from Sableye and other early hard hitters. For that reason I had reduced the number of Houndoors (50hp) and planned to try and have Aipom or Uxie starts. I now think this was a mistake, because it took the focus of the deck off of Houndoom hitting hard and early. As it turned out in the tournament, by the time I had Houndoom set up – my opponent often had their main attacker ready to KO him. By trying to get a “safe” start, I actually made my deck less effective.

So I am taking the lessons I have learned and revamping the Hounds for the next tournament; keeping what worked and trying to overcome its weaknesses. In closing, I had an amazing time at the Provincials, had many great battles and met lots of really wonderful people. It definitely won’t be my last big event.

p.s. For those readers who might be wondering why I would ever want to take this deck to a tournament, I would recommend reading the article on the link below. It’s about Magic players, but I think it applies equally to Pokémon players. I’d say I was a player who is mostly in the “Johnny” profile. 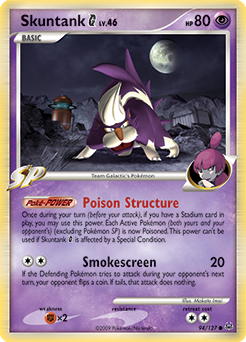