I met a TON of awesome people at Pennsylvania States. THANK YOU to everyone that came up to me and introduced yourself, it was so cool to be able to meet everyone. I didn’t realize that I had so many friends out there. I would attempt to list everyone’s name that I met, but I’m afraid I’ll leave someone off the list. You know if we talked, and I genuinely thank you for saying hi. :)

Now onto the report…

Friday afternoon was spent playing tennis with my brother, and the evening was spent driving my him and my granny to his band concert and back, so I had no time to playtest before the event. I don’t have cards to build any decks, so I called my good friend who owns a lot of cards to build me Jumpluff; he seemed to oblige. I went to bed pretty early Friday night, woke up at 6:30 Saturday morning, drove to quaziko’s house to pick him up around 8 AM and then picked up my comrades from school, Jeff and Joe, from the train station.

We were on our way toward Lancaster, PA for the tournament. I want to note that the road we take to the tournament is probably my favorite road to drive on (the 30 bypass for any PA people)…there is never any traffic and I can cruise 15 over the limit the whole way. Haven’t been pulled over yet! (knock on wood)

We almost got lost on the way to the tournament. There is a turn that I always miss going to this place, so we payed extra attention to look for the sign among the farm land, but eventually had to turn around because we knew we missed the turn. We finally found the turn and realized that someone removed the street sign…there was just a bare post there! Someone must have been trying to sabotage us…

Anyway we got to the tournament with time to spare and my friend who owns lots of cards handed me what I thought was Jumpluff. I opened the box and was surprised to find Gyarados…whatever, I’ll go with it. I at least know how to play the deck, unlike LuxChomp. This is what my list looked like:

I know I had advocated using Call Energy in this deck before, but people have been telling me it works fine without Call, so I went for it. Not using Call gives you a little more space. When using Luxray in this, you want Warp Energies to use it most effectively (Warp out Gyarados then Level Up Luxray and retreat / Poké Turn it), and without Warp Point, you need Cyclone Energy, so Call is axed. You could play Warp Point instead of Cyclones, but Energy is needed to KO Mr. Mimes. It’s also good for retreating (though I guess Warp Point would allow you to basically retreat too).

Here’s how my day went…

Round 1 vs Kyle M. using some kind of SP deck

I’m not really sure what Kyle was using to be honest, he plays some weird kind of SP variant. Anyway I draw my hand of 7 and see only one basic staring back at me…the dreaded Unown Q. I “win” the coin flip and go first. I draw my card for the turn, hoping to topdeck a Sableye, but that didn’t happen. All I can do is pass. Kyle then plays a Garchomp C, attaches an Energy and Energy Gain to it, Poké Turns his active, and Claw Swipes for 30. Game.

0-1 (another great start to the today)

Round 2 vs Tangrowth / Sunflora / Sceptile

When my opponent flipped over a Tangela, I was a little worried. I’d never played against this deck before, and I was worried that Water resistance along with all Tangela’s healing power would be too much for Gyarados. I had an ok start, but by turn 3 or 4 my opponent was able to get a Tangrowth LV.X leveled up from Tangrowth SF (the one that heals inbetween turns), so he was essentially he was able to heal up to 60 damage per turn. 30 damage resistance to Water means Gyarados’ max of 90 from Tail Revenge would pretty much be negated.

I luck out in that my opponent missed one of his healing flips and that I was able to get an Expert Belt attached and drop some Crobats to KO the Tangrowth. He was not able to draw into anything after that unfortunately, and I had a pretty easy path to my final prizes.

My hand is looking pretty bad. I think I started with Crobat and Magikarp. My opponent got the usual LuxChomp start with a quick Luxray / Garchomp. I have no Supporters in hand and determine my best play is to promote Magikarp and play a Cyclone on it to force out a benched Pokémon without Energy (and hope that my opponent gets extremely unlucky and isn’t able to retreat). I use Sea Spray, hoping to get like 20 heads. My first flip…tails. My opponent then retreats and KOs Magikarp. I’m left with a lone Crobat. Ugg.

I luck out finally and topdeck a Pokémon Collector. I get Sableye and 2 Magikarp, then Impersonate for Felicity’s and discard the 2 Magikarp. My opponent gets another KO, but I was able to draw into enough stuff off that first Felicity’s to get some Gyarados rolling. I was behind by 2 or 3 Prizes before I got my first KO, but I noticed my opponent hadn’t drawn into a Cyrus yet, so I knew I still had a chance at winning.

I basically play the game of my life and we get down to 1 Prize remaining for him and 2 for me. I had played a crazy amount of cards to stay in the game (like playing a Crobat and 3 Poké Turn to score a KO on an Expert Belted Luxray GL LV.X one turn), so I was really worried about my opponent sniping something on my bench for the last prize. My bench was 2 Crobat G and 1 Luxray GL LV.X with an undamaged Belted Gyarados active. The Crobats would be extremely easy prizes.

My hand is garbage, so I play Cynthia’s Feeling to draw 8 new cards, 2 of which were my last Super Scoop Ups. I know my best option is to play both and hope for 2 heads, to scoop up the Crobats and leave only Luxray and Gyarados in play, both of which would be extremely difficult to Knock Out. I manage to roll 2 heads and save the Crobats! Play of my life!

My opponent goes and surprisingly isn’t even able to attack me with his Luxray LV.X. I was sure he’d Aaron’s back him Lucario GL which I had KO’d early off a Bright Look, play an Energy, Gain, and Crobat then Trash Bolt me for a KO. But he didn’t have an Energy or Gain, and couldn’t deal any damage. I 1HKO’d his Luxray the next turn. My double Scoop Up play on my Crobats was still irrelevant in the grand scheme of things, but was still really cool though. ;)

I actually know how to play this matchup, so I felt pretty good once my opponent flipped over a Spiritomb and Gastly. I get an ok start and my opponent’s is pretty bad. He is able to get Gengar LV.X out and a couple Mr. Mime, but I am able to Bright Look with Luxray two turns in a row to KO his Expert Belted Gengar LV.X. He didn’t really have much left after that, but with 2 Mimes in play I had to wait until I topdecked some Energy or Poké Turns / Scoop Up so I could reuse Luxray and snipe basics on his bench (or attach enough energy to Gyarados to attack Mime). I draw my last prize after my opponent gets a couple tails on Mr. Mime’s attack and I play 2 Crobat and a Poké Turn to Knock it Out.

Round 5 vs quaziko with LuxChomp

I got my 5th non Sableye start of the day and quaziko is able to get a jump on me. He is a really good LuxChomp player and I just wasn’t able to come back from his quick start. I may have made a couple mistakes during the match, but I was never really in any kind of position to win after falling behind.

Round 6 vs Jeff with Shuppet

I was dreading this matchup…I only play 6 Energy total and if Jeff is able to keep a lone Mime in play, I can’t do squat. I had never tested this matchup either, so I wasn’t really sure if there was any way I could win.

I elect to go for my Mime tech and make him attach energies to his Shuppet in order to be able to KO it. He play a game of cat and mouse for a while, and eventually he gets at third Energy attached, a Cyclone, and forces my benched Mime active and KO it.

The rest of the game is kind of hazy…I remember hitting a crucial Super Scoop Up on my damaged and Belted Gyarados and getting 3 Energy on it at some point to KO his Mime. Jeff only played 1 Mime, so I was able to get some KOs off Cyclones too. It was a really good game and I somehow came out on top.

Round 7 vs Andy with LuxChomp

I start with a lone Magikarp and “win” the toss. I draw and pass. Andy drops a Crobat and attacks with an Uxie for 20 for the KO…

I missed the cut in 27th place. I was happy with how I played on the day, as I had 0 Sableye starts and could have easily finished 2-5. The lack of Call Energy in the deck makes you more susceptible to those turn 1 donks I guess. If I had gone second those 2 games I was turn 1’d, I would have been ok because I had a Collector in hand.

I had to wait around for quaziko to lose to a 1/1 Mewtwo tech again, so I took notes on what the top 16 looked like…here it is if you’re interested:

I’m sure there are some typos in this…I’ll edit it later and try to add some pictures. There are about a half dozen other reports waiting to be posted, I’ll get to to them tomorrow evening. Time to do homework… 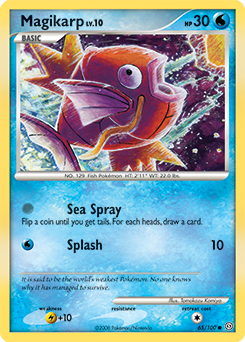