I woke up at the crack of dawn to drive two hours to Madison, Wisconsin. My friend, who played in the Masters division, and I played a round of Pokémon in the car. I, of course, failed miserably. Not paying attention, we got lost and had to take an hour detour to get to Madison. Luckily, we made it in time for registration. When I went to submit my decklist, they handed me a reverse holo OP Gabite from the Platinum Supreme Victors set. I wasn’t expecting that.

I poked around to see some Masters Division practice battles, when my friend pointed out another Flygon variant being ran with three different Ampharos. I thought it was cool, stood and watched for a few minutes, the walked away to poke around the shop. This was the largest gaming store I’d ever been in, and it was packed.

They posted the roster, then round one matchups. I was a bit jittery seeing as this was my first tournament.

Round 1: Jumpluff
I had expected this at some point throughout the tournament, I just didn’t expect it to be my first round. I had some experience with a Jumpluff deck and I knew they were quite annoying. I had trouble setting up in the beginning, and he sniped my active while he had a full bench and I had two Pokémon on bench. He had his last 2 Prize cards left, so with my Claydol active I slapped on an Expert Belt on it, and said “Kill me.” I wish I had Mr. Mime.

Well this was sure an odd deck. I sure wasn’t expecting to see Ho-Oh being run. Ho-Oh was his active through most of the game. I think I chumped my Nidoran + and a Trapinch before I started to get the hang of it. I whipped out my Mewtwo and quickly leveled it up so Ho-Oh couldn’t touch it. I started to build up a Flygon on my bench while taking discarded Psychic energies and attaching them to Mewtwo. I one shot his Ho-Oh, which he then rolled for Phoenix Turn but failed and sent out his uncharged Regigigas.

I pulled back my Mewtwo, sent out my Flygon and leveled it up. He couldn’t attack be because Regigigas had no energy, so I stood Flygon as active as I used “Second Sight” to find his Regigigas LV.X and force him to discard it. I wind up one shotting his Regigigas with Mewtwo LV.X again, and his sends out his Staraptor FB. I shrug and force it back to his bench with Palkia LV.X after he levels it up and pull out his benched Garchomp. I wind up one shotting the Staraptor LV.X with Extreme Attack, causing me to win the game.
The game attracted a crowd of a quite a few people. It was somewhat of a close game.

This…was one of the oddest matches of the day for me. It involved another stall deck, Gengar – Crobat. He started with Baltoy as his active as it lasted for more than half the game, and I proceeded to have Mewtwo LV.X as my active. He’d spend his turns looking for a single card. He’d draw and immediately pass. I built up my bench to be absolutely perfect, then decided to attack the Baltoy with Mewtwo LV.X with Psyburn for 60. He brings up a Crobat G. I one shotted with Giga Burn, and he brings up another Crobat G.

I charge, and use Giga Burn again, and he brings up his Claydol. This process continues until I have 1 Prize card left and he brings up his Gengar with Unown G attached and levels it up. He Level-Downs my Flygon X on the bench, and one shots my Mewtwo LV.X with Poltergeist. I had a very full hand at the time. I bring up my Flygon and search for the LV.X with Premier Ball.

I use Sand Wall and manage to do 20 damage due to resistance and the lack of energy. He quickly draws a card and passes. Now for the last fifteen minutes we’ve had a judge sit to the right of me watching the match. I give him a weird look due to my opponent’s choice. He could have one shotted me with Poltergeist again. I proceed to grab his benched Uxie with Palkia LV.X’s Restructure, when another judge walks over. The judge next to me asks how much time is left, and the other one said it been time for a while. He stands up, declares me the winner, and walks away. Odd.

Round 4: ?????
Now I know I battled someone for round four. For the life of me, I can’t remember who it was or what deck they ran. All I know was I didn’t lose. Sorry.

Round 5: Ninetales /Charizard / Typhosion
This didn’t surprise me, and neither did the outcome. I couldn’t set up fast enough, so I kept getting one & two shotted by Charizard. I did managed to take 1 Prize card though. That’s all I wanted. Another game where it would have helped to have had Mr. Mime.

This was a nice match because I actually knew the kid that I played against. I’d met him at a bowling tournament a few years back. We both started out with Claydol as our active. He brought out his Shaymin, and built his bench up with two Claydols, a Uxie, a Tangrowth, and a Sceptile. A very good and awesome combo.

I chumped my Nidoran + and walled with Mewtwo LV.X for a bit. Once I had a set Flygon on my bench, I sent it out, leveled it up and killed the Shaymin LV.X. He forgot to discard the top card of his deck from time to time due to Wind Erosion, so forcing him to dump things like Night Maintenance was priceless. He brought up his Sceptile which I managed to weaken with Flygon before retreating due to damage. A set out Mewtwo LV.X and hit it so it died. He sent up his Tangrowth and didn’t dare level it up even though he had the card in his hand. I believed I two shotted it with Flygon. That was another close match, but I managed to win.

So overall, I placed 13th out of 47. For my first tournament I’d say that I did okay. I was told that there was another girl in the division other than me, and that there were two other Flygon decks in my division too. I won a tin with some Garchomp card cases, and a Great Ball beach ball.

Well I had loads of fun, and I can’t wait to head to Illinois State to see some new people and the new friends I’ve made. c: 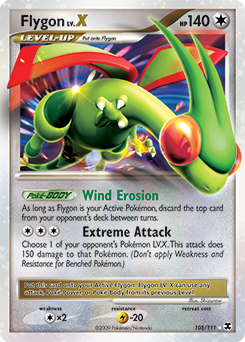