I feel as though the popularity of the card Cynthia’s Feelings somewhat died down as SP decks became popular. SP variants have almost no need for the card, and decks playing against SP don’t really get that much advantage from using it either. Let’s face it…the metagame is pretty much non-SP vs SP at the moment; you have to make sure your deck can beat SP or else it’s not really worth playing. LuxChomp won by far the most State Championships in the Master’s division, so you know it’s going to see play at Regionals.

However, with the late emergence of speedy decks like Jumpluff / Luxray GL LV.X and Sableye / Garchomp C LV.X, Cynthia’s Feelings may be an intelligent play once again. Decks like these try to win quickly, and Cynthia’s Feelings may be the best possible defense against them. It allows you to have the potential to counter-punch early game, giving you a response to your opponent’s fast start.

Along with all the speed out there right now, there is also an abundance of disruption. TGI Power Spray, Mesprit LA, Gardevoir SW, Giratina PL, Team Galactic’s Wager, Spiritomb AR, and anything that can take out Claydol (Luxray GL LV.X, Garchomp C LV.X, Gengar SF, etc…) are going to really limit your options. They either hinder your draw or eschew your hand. Cynthia’s Feelings is a card none of these can stop, and if are able to refresh your hand to 8 cards, there is a high probability you will have some options at your disposal.

It may be worth trying to structure your trainer line in certain decks to accommodate in the area of 3 Cynthia’s Feelings. Maybe play more Pokémon Communication so that you are able to search out a Pokémon after playing Cynthia’s. I am going to try fitting more Cynthia’s into my decks and see how it affects matchups. Gyarados could probably do well to fit in 2 and 1 VS Seeker. Jumpluff itself may benefit since it has so many weak starters that could be KO’d turn 1 or 2.

Let me know what you think of Cynthia’s Feelings…do you think it may see a resurgence during Regionals? 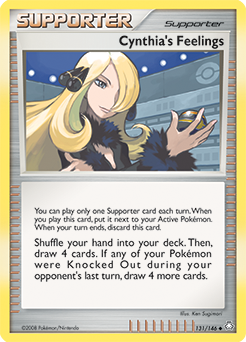