About a month ago, my friend Michael, known around here as Michael Scot Masacre was at my place of work with his Pokémon cards when I off-handedly bring up, “Hey, I still have a lot of my old cards.” Of course, he wanted to see them, so after work I head home and load up my cards and head back. We go through cards, play a quick game of Old School vs. New School and like that, I’m back in the saddle. Since then I’ve been playing more and more with the help of Michael, but enough back story. What I have today is a deck build I decided to try and so far it’s not too bad in my opinion. Without further ado, I’ll begin talk about its contents.

First up, the name Wormgrowth obviously comes from the two main elements: Wormadam and Tangrowth. Wormadam has his strategy of using Plant, Sandy, and Trash Cloaks to cause quite a bit of havoc (though I do not run Trash Cloak in this deck), and Tangrowth himself having large damage dealing possibilities. On top of those two, I have a 1-1-1 Exploud line and a couple Claydol for draw power, as every deck should.

For those that may not know, Burmy Plant, Trash, and Sandy Cloak all have the poke-body of Cloak Evolution allowing them to evolve the turn they are played. Wormadam Plant Cloak has the Cloak Scale attack which does 50 damage for 2 Colorless and 1 Leaf Energy, along with burning, confusing, and poisoning the defending Pokémon should Wormadam Sandy Cloak be in play.

As for Tangrowth, he’s more of a direct attacker with his Swallow Up move. 50 damage, for 2 Colorless and 2 Leaf Energy, UNLESS Tangrowth has more health than the defending Pokémon, in which case his attack deals a whopping 120 damage.

Then the other two lines are tech’d in for specific reasons. Claydol for his magnificent Cosmic Power to get the cards I need, and Exploud for his poke-body Erasing Sound which relieves my Pokémon of their weaknesses. Quite helpful considering ALL of them are weak to fire save Claydol and Exploud.

On to the decklist:

Well, this is a test build so I am 100% open to suggestions, just as long as those who reply do so courteously and with constructive criticism. Sorry if my article ran a bit long, it was my first as well as being my first build. Thanks to those who read and comment. Good gaming. 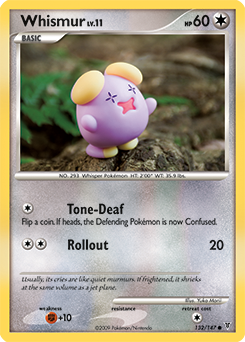