Hey fellow Pokémon players! I just started playing a few months ago with my son. We started just before Texas states and he played in it and was demolished. We have since start taking our playing a little more serious. Unfortunately, I don’t we live in an area where the nearest league is 150 miles away, so we only get to go to league once a month, but I did go to the prerelease today and it was awesome!

Anyway, just thought I would throw my deck out there and get some critiques!

pokemon-paradijs.comRegigigas FB does 20 damage for each type of SP I have in play. So, I load up the bench with as many different SP’s as possible, belt Regigigas and tear it up for 140 per turn. Snowpoint Temple allows me to add 20 HP to all non evolved Pokémon in play. Since I have no evolutions, this makes my bench hard to 1HKO with Garchomp. Since I’m (ideally) doing 100-140 damage, I don’t think me boosting my opponent’s HP is that big of a deal. I generally try to get out a Honchkrow T1, then “Honcho’s Command” to pull out a Stadium and an SP Radar. Next turn, I put Skuntank down to poison non Pokémon SP.

I get down Blaziken and do “Luring Flame” to any Claydols. Typically, most people don’t put energy on them and they are ripe for the picking. I slowly let them burn, shutting down my opponent’s draw power while allowing me time to get my Regigigas rolling. Ideally I would draw into 2 DCE, attach one to the bench and on my next turn, put down Regigas, add the other DCE, use Bronzong’s “Galatic Switch” to move the other DCE and use a Cynthia’s hopefully pull an Expert Belt. Retreat or Poké Turn my active, put up Regigigas.

I attach 4 energy in one turn and Regigigas comes out of nowhere. Other strategies to get energy to Regigigas in one turn: attach an energy (basic or DCE) then “Galatic Switch” one energy (basic or DCE, depending one which I didn’t attach), then use Flynt’s Willpower to attach one from my hand. Using the same set up, I can us Lucian’s assignment, or even an Energy Gain, all to power up Regigigas all in one turn, stalling with “Luring Flame” in between.

Just some thoughts of mine, let me know yours!

6Prizes = Best Pokémon site out there! 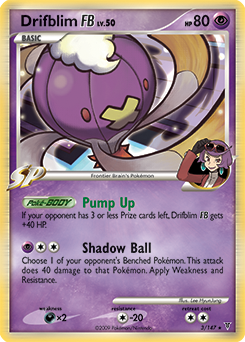