Hi guys, this is my first article on 6p and as such I would just like to write a little blurb about myself. I’m an Australian Pokémon TCG player (yeah, all our cards are upside down because we are down under) I follow the US metagame quite closely as something to do while not at University.

pokebeach.comAnyway, onto my deck. I have always had a love affair for lantern, the little electric dolphin/lanternfish is such an awesome guy and with the imminent release of HGSS Unleashed’s Lanturn Prime there is finally a reason to actually consider him!

Feral Turn works by making use of the synergy between Lanturn’s attack, “Powerful Spark”, that for a Lightning and 2 Colourless energies will do a minimum of 70 damage and Feraligatrs ability “Raindance”. Powerful Spark is a fairly average attack, however for every other energy you have in play it does an additional 10 damage.

This is where Feraligatr Prime makes his grand entrance as the king of all energy accelerators thanks to “Raindance” which allows you to attach as many Water energies from your hand to your water Pokémon. Despite being a stage 2, with a heavy Retreat Cost and a forgettable attack in “Hydrocrush”, Feraligatr serves as the main focus of synergy around the deck. Its 140 HP is more than adequate for a bench warmer, so you can rest easy Garchomp C isn’t going to surprise your reptilian wonder.

pokebeach.comWith the addition of “Interviewer’s Questions”, a supporter that lets you look at the top 8 cards of your deck and select any energy you find there and put it into your hand, Lanturn’s attack begins to look somewhat formidable. This is compounded by the stage 1 Crocnaw from MT that has a power with a similar effect except that it is only the top 5 cards.

The main problem I was having was how to set up again after a Lanturn or Feraligatr Prime fall? The answer of course is Floatzel GL LV.X His power, “Water Rescue” allows you to send any of your fainted Water Pokémon right back into your hand, and with a Broken Time Space/Rare Candy and Feraligatr’s ability this creates a scenario where you can never truly be Knocked Out. Floatzel GL LV.X also comes with the added bonus of a free Retreat Cost and a powerful attack that can be utilized if in a really tight situation.

Of course this deck is powered by the ever ready battery Claydol, who provides unparalleled draw. Another bonus is that all the basics in this deck have a minimum of 60 HP, which while certainly not bullet proof does provide more defense against the dreaded T1 donk.

pokemon-paradijs.comThe crux of this deck is truly Lanturn Primes unprecedented type coverage. The “Bolt Beam” combination as it’s known in the video games (a reference to Ice beam and Thunderbolt), is the best move type combination in the Pokémon world. Lanturn Prime makes full use of this with its ability “Submerge”, which means that it can change its type to water for a turn when you need it to. This ability is crucial for the 3 energies you need to charge up Lanturn Prime, however “Powerful Spark” dictates that it does 10 damage for ALL energies on ALL of your Pokémon.

This means that once you power up Lanturn, you place the remainder on Feraligatr, so as to act as an energy store for your attacks that doesn’t have to be replaced should Lanturn fall. It should be noted here that as a tactical decision, Lanturn’s power should ALWAYS be activated where you don’t need the Lightning type coverage. This is because Floatzel GL LV.X Pokémon power only works on Water Pokémon, so don’t be caught out!

Some major drawbacks however include:

My decklist has tried to compensate for these weaknesses, and I fully believe it to be a fun workable deck albeit flawed in some respects. I would like plenty of feedback from anyone who has time. I know trainer lines can always be improved and worked out with each individuals play style, but I welcome any suggestions.

Here is a sample of decklist I have been toying with (with special mention to Bebe’s Search for the proxy printing function! Where would I be without you mate!) 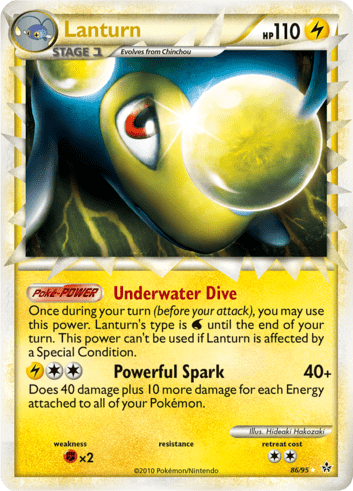