Hey people my names Tommy Roberts and this is my first article on 6P so go easy on me. I got back in to Pokémon about a year ago after a four [month] break. I have heard a lot of people saying that the new Pokémon set Unleashed has very few good cards so I thought that I would make a list of the top 5 cards from the set and why they will probably be played at Nationals.

pokebeach.comThis card is probably the most hyped card in the set when you first read the card it looks great I mean Severe Poison will poison the defending Pokémon for 4 damage counters instead of 1 for one Energy. The main problem with this attack is that Unown G is run in a lot of competitive decks and will make Severe Poison useless also most good Pokémon have free retreat so if they need to remove the poison they can just retreat there are also a lot of different ways to remove poison.

Crobat’s second attack Skill Dive dose 30 damage to one of your opponent Pokémon for one Energy. This attack is nice, but Gengar can do the same attack but if the Pokémon you choose to attack has a power it dose 60 instead witch makes Crobat’s attack look very bad.

The biggest problem with this card is its weakness Crobat Prime has a x2 weakness to Lightning and with Luxray GL being one of the most popular cards in the format at the moment this is a big problem.

My conclusion on this cards is that it is an okay card the one energy attacks means it can be fast and The free retreat is nice but there are to many flaws to make the card very good. I think you will see Crobat Prime at Nationals just because of all the hype and how good the card looks when you first read it and that’s why it made it in to the top 5.

pokebeach.comWhen you first read this card you probably won’t think that all that great, but it does not say anything about basic Energy meaning this is the only supporter card in the format that lets you almost search for a Special Energy and with DCE and Call Energy being played in a lot of good decks. This card can be used in a lot of popular decks in the format which means it could get used a lot at Nationals.

The main problem with this card is that you don’t get to search for the Energies, so you could not get any and waste your supporter for the turn.

pokebeach.comBlastoise has a very good attack which is similar to Garchomp C attack Dragon Rush which is one of the most played cards in the format. Blastoise attack Hydro Launcher for 2 Water and 1 DCE does 100 damage to any of your opponent Pokémon then you have to return 2 W Energy to your hand from Blastoise.

This may not look great because of the high energy cost but you can use cards like Feraligatr Prime to attach multiple Energy cards at once or Floatzel from Unleashed to attach energy to Floatzel using his Poké-Power then use Blastoise Dig Well Poké-Power to move the energy. When you get Blastoise set up you should be able to be 100 damage each turn.

The two main problem with Blastoise is that he has a x2 weakness to Lightning which can be very bad in this format and he has a very high Retreat Cost of 3 Energy. I think this card will see a bit of play at Nationals, but not a lot just because of the high retreat and the weakness.

pokebeach.comJudge is a great supporter that makes you and your opponent shuffle there hand in to there deck and draw 4 cards. Judge does the same as Giratina from PL Poké-Power Let Loose, but when you play Judge you don’t have to risk having Giratina on your bench which has 3 retreat and a bad attack.

Judge will be used in a lot of different decks but the main one will be Sablelock to give your opponent a bad hand for the game. Judge will be in some of the best decks at Nationals.

This is the best Prime from Unleashed it has a very good Poké-Power witch is once during your tune you may put 1 damage counter on one of your opponent’s Pokémon which is like a Crobat G every turn. Its attack Dragon Steam does 60 for 1 Water energy which can Donk very easily is a great attack. Kingdra Prime can also be used with Kingdra from Legends Awakened witch is already a good deck.

Kingdra Prime has a 1 Retreat Cost witch is okay, but not great. Again the main problem with Kingdra Prime is the weakness which is x2 to Lightning.

Kingdra Prime will probably be the most played Pokémon card at the Nationals from Unleashed and will be used a lot in the next format. 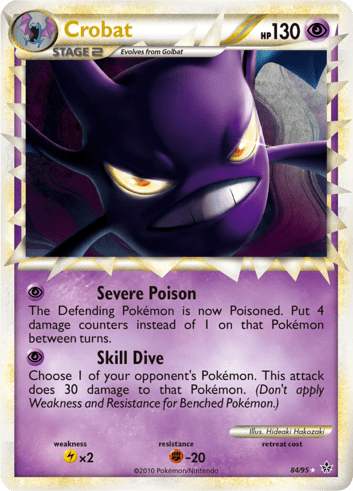