pokemon-paradijs.comMy name is Evan. I started playing Pokémon in February, and my brothers threw together a Machamp deck to get me into the game. The deck was fairly simple to operate, and “Take Out” was easy enough to figure out. But it was very obviously flawed against Stage 2 decks, or any deck running Unown G. Over the next few months, I toyed with some different card combos. I took a version of FlyChamp with a Metagross tech to States and Regionals, going 4-3 and 5-3, respectively.

After these tournaments, I was at an impasse. I either needed to find a way to make the deck more competitive, or I needed to head a different direction. I decided to simplify my decklist a bit to make sure I could access all of the cards I needed to draw into to be successful. I also tried a few things that may seem unconventional at first glance. Anyway, I took the new deck to 3 different Battle Roads across Michigan and Ohio, going 6-1 (2nd place), 7-0 (1st place), and 7-0 (1st place), beating 3 of the top 10 players in Michigan along the way.

pokemon-paradijs.comMy first departure from conventional wisdom was playing 3 Machop instead of the traditional 2-1-2-1 line. The reasoning here is that Machop is by far my best starter, even if donking isn’t an option. So much emphasis has been placed on “disruptive” decks lately, but let’s not forget that the best form of disruption is taking an early prize and Knocking Out your opponent’s preferred starter.

Between running 3 Pokémon Communication, 2 Uxie (props to my friend Ryan Graham for that suggestion, which ultimately put this deck over the top), 4 Rare Candy, and 3 BTS, I was nearly always able to get a T1 Machamp and use “Take Out” for the early prize or the donk.

When going first, Machamp is a nice tank to have active while I get Flygon set up on the bench. I also found myself using Super Scoop Up as an early game set-up card to get another Uxie drop, or even another Cosmic Power if BTS was in play. I went with the DP Machop for his “Low Kick” attack. With one F Energy and an Expert Belt, I can Knock Out a Luxray that hasn’t been leveled up or an Ambipom.

Against Stage 2 decks, Flygon was my weapon of choice. While most players choose to focus exclusively on Trapinch SW for it’s “Sand Tomb” and “Inviting Trap” attacks, I’ve included 2 Trapinch RR in my list. Over and over, I was able to pull this move: my active Pokémon was Knocked Out. I promoted a benched Trapinch RR, used his “Gather Sand” PokéPower to attach a F Energy from my discard pile to him, which doesn’t count as attaching for the turn.

Then, I attached a DCE for the turn, Rare Candied up to Flygon, and had a “Power Swing”-ready Flygon out of nowhere. I used this trick several times to Knock Out my opponent’s Garchomp C LV.X, and they never saw it coming. We all know Flygon LV.X can be incredibly versatile, and few Pokémon can withstand his “Extreme Attack” attack.

pokemon-paradijs.comYou might have also noticed my lack of rescue-type cards on this list. There isn’t a single Palmer’s, Night Maintenance, or Pokémon Rescue. I chose to take this risk because this deck is all about out-speeding my opponent. Nearly every card in the deck can help me accomplish what I’m looking to do in a given turn, and there is rarely any dead weight in my hand.

Energy is easy to re-circulate with Trapinch RR’s “Gather Sand” PokéPower. There were a few times where I had to say an early-game goodbye to Machamp LV.X or Flygon LV.X, but with 3 full Flygon lines and 2 full Machamp lines (and with the current trend metagame trend of picking off benched Claydols and Uxies), I never ran into a situation where I ran out of attackers, even in games that went down to the final prize.

Anyway, I had a great time wreaking havoc on an SP-heavy metagame, double-weak Tyranitar, Cursegar decks that walled with Mime or Spiritomb (“Take Out” bait), and any deck that relies on Pokémon LV.X. Jumpluff was a tough matchup (Flygon works best with a full bench), and LuxPhan nipped me in Okemos, MI Battle Road finals. Feel free to comment! 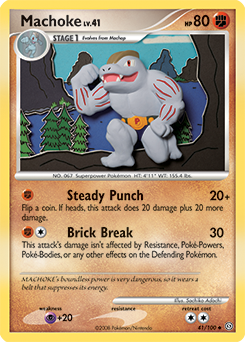