There are many fast, popular decks in the current format. With the change, Uxie’s draw engine might be the only one left, but in my opinion, Uxie’s all a deck needs to be fast. Let me talk about the decks and their counters:

pokemon-paradijs.comJumpluff is a fast, heavy-hitting deck in the current format, but it has many weaknesses, such as x2 fire weakness, low HP, and every bench spot needed to be filled.

My personal favorite Jumpluff counter is Dusknoir DP, its Dark Palm very useful against Jumpluff, since they must limit their bench space to three, meaning if you limit your bench space as well, Jumpluff can only hit for so much.

Another counter to Jumpluff is Mr. Mime MT, since Jumpluff is a deck that uses so few energy. Unless they run Dialga G LV.X, they can’t touch you, and I’ve never seen a Dialga tech in Jumpluff. Mr. Mime isn’t the best attacker, but if you run Kingdra Prime and Crobat G, then you can easily, slowly Knock Out Jumpluff.

LuxChomp is a beast of a deck, but it has many weaknesses. Two highly searchable cards, Mankey SV and Toxicroak G Promo, 1-shot Luxray.. So easy prizes are both for you and the LuxChomp player, but there aren’t as many cards that search for LV.X’s, and most SP players only run 2-3 SP Radar.

If they have Luxray active, you get either a Mankey or Promocroak and hit for 60, x2 for Luxray’s weakness, which 1-shots Luxray unless they play Snowpoint Temple, which makes you either need to drop a Crobat G or use Toxicroak’s Poison Revenge to do +10 for poison. Basically, you need something to 1-shot it or they will use Healing Breath, and do it all over again.

So when they use Garchomp to snipe, you bring out your Ambipom G, and use Snap Attack to 1HKO Chomp, and when they use Aaron’s Collection, you just 1-shot everything again. Seems simple.

pokemon-paradijs.comDonphan is a mean donk deck, but if you survive the donk, he’s still too much of a tank to deal with.

Donphan has a damage-reducing body, but there are attacks that go through it. Check out my friend who never sees play. His name is Arceus.

Water Arceus, AKA AR4, has an attack called Fastwave that does 50 damage, and goes through all effects on the defending Pokémon. So that means that Donphan DOES NOT eliminate 20 damage from Fastwave, and Fastwave with Expert Belt 1HKOs Donphan with an Expert Belt, and 1HKOs Donphan without a Belt with a PlusPower. So Arceus DOES have a use. Another use for this is to use AR7 AKA Psychic Arceus with the Omniscient Arceus LV.X and water Arceus in play, and you use Fastwave against Mewtwo LV.X to 1HKO it.

Another card for this purpose is Gyarados MT. With Magikarp MT, Gyarados accesses a Flail attack that does +30 damage, meaning if Donphan atacks, Gyarados 1HKOs it, and if he doesn’t, attach a Rainbow Energy to Gyarados to put 10 damage on him, and do 60 damage to Donphan (I did the work of including his body and his weakness) Gyarados’s downside is starting with a lone Magikarp and getting donked.

Shuppet is a mean deck that tries to squeeze every last damage counter out of cards in the deck. Shuppet itself never takes damage, or does it?

Luxray DP’s Gleam Eyes and Lumineon SF’s Fin Luster each allow you to look at your opponent’s hand and bench a card you find there, then swap it out with the opponent’s active (sounds familiar, huh?). Luxray is when you play it, just like its SP LV.X, and Lumineon has to be active. Lumineon does not 1HKO Shuppet, however it has free retreat so you can swap out for something that does. These could also be used as a tech in Jumpluff.

pokemon-paradijs.comT-tar is a recently developed deck. It isn’t the best in speed, and fighting weakness x2 hurts. However, Exploud can be used to eliminate the weakness.

A counter to Tyranitar’s first attack, Darkness Howl, is Nidoqueen RR. The damage done will be gone completely by the time your opponent gets another chance to attack.

There really is no counter to Power Claw, since it goes through everything. But Megaton Tail will eventually make them deck out. Flygon LV.X comes in handy here, you basically use Inviting Trap with Memory Berry for Claydol and make them deck out while Sand Tombing.

That’s basically that. If anyone thinks there are any other counters for decks that I listed, or any decks I didn’t list counters for, please comment. Always remember that I’m awesome! 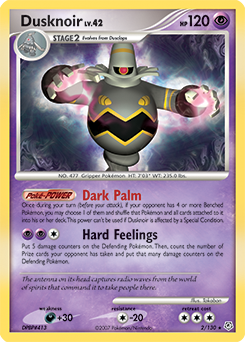