Editor’s Note: I’m not really convinced this list or deck idea is that great, but things are slow right now…

pokemon-paradijs.comI looked through PokéBeach card scans for Legends Awakened with a buddy the other day, and we noticed the Luxray. It was an OK card; 100 for LLC and 40 for CC and search the discard for a lightning and put it on Luxray.

But what really makes this card shine is its Poké-Body, Rivalry. When your opponent has Pokémon LV.X in play, Luxray’s attacks do 50 more. There should be a long list of decks that run Pokémon LV.X. I’ll state a few here:

And that’s just a few of them. Basically, Pokémon LV.X almost always get 1-shot by Luxray. The only exceptions are Rhyperior, Flygon with its resistance, and Salamence, who don’t see much play.

It can also do 100 damage for 3 energy without a Pokémon LV.X in play, if you don’t mind discarding 2 of the energies (or, if you aren’t careful, 3). Its other attack does well, getting them out of the discard.

But the deck is designed to focus on Shock Bolt. This means a lot of techs, but also a lot of consistancy. I’m also trying to make it as MD-on as possible.

Here’s a list of the techs I want to use:

Nidoqueen RR to heal Delcatty and…..

Dusknoir SF for draw engine. It’s better than Uxie LV.X When you have Nidoqueen, since it draws more cards and doesn’t need a LV.X to work.

The Order of Necessity:

Get your Luxray out #1 ALWAYS!!! You need attacking A LOT and you need it right away.

You need Nidoqueen to make Luxray a tank. Keep him up as long as possible and make sure you don’t need a secondary one out yet.

Since your Nidoqueen is in play, use your resources left to get Dusknoir. It should do the work from there. 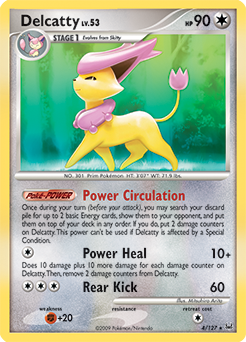