Hi members of the Pokémon community! I would like to talk about some cards that may be able to replace Claydol in your decks.

pokemon-paradijs.comNinetales can be used for good draw power because of his “Roast Reveal” Poké Power. “Roast Reveal” lets you discard one fire energy from your hand and the draw 3 cards. This is okay but is power sprayable. Ninetales pairs well with Typhlosion Prime because Typhlosion lets you attach a fire energy from you discard pile to a Pokémon of your choice. (see the combo?)

Recomended decks: Charizard, decks with a lot of fire energy and decks with Pokémon that need a lot of C energy.

Night Teleporter doesn’t let you draw any cards, but if you get heads on a coin flip you shuffle your hand into your deck and search your deck for one card (Uxie anyone?). If you choose to get Uxie, you can get 7 new cards. I have found some succsess with 2. In some decks you might need 3, but if you play it use 3 max.

Recomended Decks: Decks with a lot of Uxie, some SP decks and I have seen it used in Gyarados.

This is good for taking out low HP pokemon your opponent wants to hide and taking down Gengar SF with out worring about “Fainting Spell”. His only problem is his high Retreat Cost. I use a 2-1-2 in my Flygon deck (with great succsess) because his Retreat Cost stinks and he can snipe non LV.X cards well.

Well let me what you think and tell me if I missed anything. 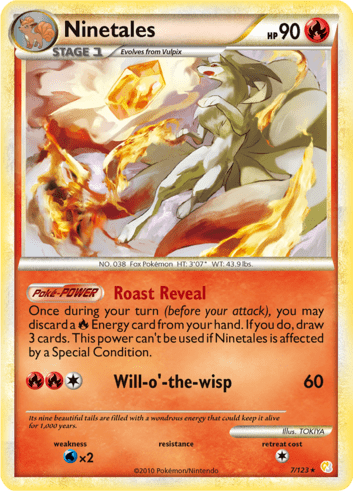