Hello everyone, this is my 3rd article I’ve written for 6P (I wrote the other two under the “Rhin” nickname) and the first one not to be about deck analysis. This time, I’m going to focus the analysis on tips to get the perfect timing to play galactic trainer cards for SP decks.

I believe the main advantage SP decks have other the rest (and what makes them rule the metagame right now) is the speed they have, and that speed mainly obtained thanks to a game-breaking line of trainers.

So what makes SP decks the most difficult to play? Can any rookie just pick up a great Luxchomp list and become the National champ? Definitely not.

The reason SP decks are considered the hardest to play, is at the same time the reason they are the best decks right now, their line of trainers.

A decent SP deck gives you at least 5 possible different plays per turn, and only 1 of them is the correct, 1 or 2 are average, while the other two will only make you lose the game eventually.

Many people know how to play an SP deck, yet they don’t know how to play their trainers, making them mediocre players, at best.
The most important thing to take into account when playing SP is that, in general, you will be faster than those stage 1 or 2 decks (sometimes even faster than turbo decks), but you will NEVER have the same attack/defense power they have, that’s why you will need to out speed them in order to win.

With that in mind, let’s analyze the trainer cards:

Let’s start with one of the most popular SP trainers, the TGI Poké Turn.

For those of you that don’t know this card (are there still players like that?) this little life-savior lets you recover an Pokémon SP, with everything it has attached, back to your hand.

Anybody can see how game-breaking this card is, perfect for re-using drop poke powers (Crobat G, Luxray GL LV.X), healing a Pokémon, “retreating”, re attaching tools or energies, and many other things.

So, when should you play this? Unfortunately, we only get 4 of them per deck, so when you play each one of this “continues” can decide the match.

The thing is you should analyze the value of the card, considering the moment of the match you are. During early game, having a Poké-turn is practically useless, you have no powers to re use, and no Pokémon to heal, so its just dead-draw. However, its importance increases as prizes are taken. Everyone can agree that if you are, for example, on a 2-2 match in prizes, and haven’t used even one Poké turn yet, you practically have won already because your opponent will have already used up most of his resources to pick those prizes, while you did the same without using yours.

So the main rule is, don’t waste Poké-turns to draw more with Uxie, or to reattach things. Try to save them up for mid-late game, healing in one turn the damage your opponent is struggling so much to do can be really annoying, and Bright Looking that attacker your opponent is still setting up can turn the tide of the match in a second.

Another one of the big SP trainers, and the only card in the game that can be used outside your turn. This one is one of the most disrupting cards in the entire metagame, and can easily turn your opponent’s smile into tears spraying that Uxie he so much needs.

As with Poké Turn, I like to play 4, to maximize the disruption power, and mainly to have one in my opening hand. I believe its the opposite of Poké Turns; its value is in the early game, when your opponent is trying to set up his attackers with Poké-Powers such as Claydol’s “Cosmic Power” and Uxie’s “Set Up”. A few well played Sprays on your part can get you an easy victory out of a hard match up.

The problem here is that your opponent usually plays too many powers during the game, but you only can stop 4. So, which ones do you stop?

This question is MUCH more significant than it seems, as many SP players waste their Sprays at the simple hearing of a power activating.

It’s mainly situational, but the order in which powers should be stopped is generally like this Uxie-> Luxray GL LV.X (only if you have something setting up you don’t want KO’d)-> Claydol-> Gardevoir-> Bronzong G (only if Garchomp LV.X is around)-> Azelf-> whatever else.

As I said, this is mainly situational, depends strongly on the cards your opponent has in hand, what deck he is playing, how many prizes you have already taken, etc. Many times it’s better to save the spray if your opponent’s Uxie/Claydol will only give him 1 or 2 cards.

The main lesson here is to figure out what your opponent is trying to do by activating that power. Is it REALLY necessary to his strategy? Would he get stuck if he couldn’t do it? Or it’s just a trap to make you waste a spray?

If the answer is yes to the first or second questions, spray at will!

There’s not much to say about this one, actually. It’s a card that lets you speed up your attacker, and also lets your set up a surprise tech to revenge-KO something your opponent has, bypassing the 1 energy per turn attachment rule, kind of like Bronzong G.

Considering that, this card keeps an overall value through the game, with a bit more importance in the beginning, for cheap early prizes and disruption. You should attach E-Gain to your main attackers, and only attach them to techs when you are sure to revenge KO your opponent’s active, and if possible, with a Poké turn in hand, to recover the tech and the gain next turn.

Not much to say here either… indeed a very important card, but probably is the least important of the 4 SP trainers.

Its function is to search for a Pokémon SP, at the cost of putting one card from your hand into your deck, but as it’s a trainer, you can combo it with things like Collector, Roseanne, Bebe Search, or Cyrus.

This is the reason its worth is in early game set up mainly, although it still has value to recover from KOs, and to deal unexpected KOs with Crobat G´s “Flash Bite”, and still be able to attack that turn.

Its really easy to use and pretty effective, a card probably as good as Bebe, not only to get level ups, but to get a Crobat for extra damage, or the tech you need, together with the energy and E-Gain if you play it with a Cyrus, getting a surprise KO from your opponent.

Well, these are only my opinions on the matter. I decided to write an article about it since I have seen A LOT of players try to use SP decks and fail horribly at it, thinking that just because its a powerful deck, anyone can use it to win. I have been playing SP decks for more than 8 months, and I still feel I don’t play them at their full capacity, so I would like to hear your opinions on this.

When/how would you play your SP trainers? 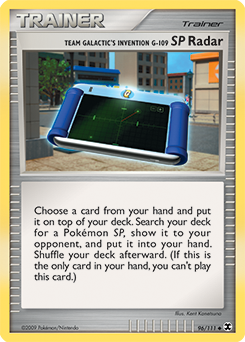