Hello everyone, I’m a fairly new user of SixPrizes.com and have immediately fallen in love with the article system. I’m here to talk about a rouge deck that I have come up with entitled “Bed Bugs.” Bed bugs are a combination of Dustox PL and Beautiful PL. There are a number of ways this combination in particular appeal to myself.

First off I will present the decklist:

You may look at this and think “If it wasn’t played DP on, what makes it better MD on?” Well, the only card from stopping Beautifly’s wings from flying was Unown G. Unown G’s Poké-Power “Guard” made it so all effects of a Pokémon aside from damage were ignored. Obviously because this deck is brutal solely on behalf of special conditions, such as Dustox’s “Chemical Scale” attack, we took a look at this card and never looked back.

Well guess what! MD on cycles the Great Encounters set, making Unown G illegal for tournament play! That means “Bed Bugs” will be viable next season. Let’s take a look at the Pokémon in “Bed Bugs”

I’ve always been a fan of this underrated bug; having your opponent miss an attack can often win you games. How does this bug do that? Well, for a C energy and Grass energy, it does a base 20 or 40 with an Expert Belt. The highlight of this attack is that not only is the defending Pokémon poisoned, they must flip a coin next turn to attack. If the coin flip happens to be tails the attack fails! Pretty good eh? Well that’s not the highlight of the card.

The highlight of the card is Dustox’s “Chemical Scale” which for a Double Colorless Energy and Grass Energy does 60, or 80 with an Expert Belt. If the defending Pokémon has a Poké-Power or Poké-Body (ex: Meganium Prime) they are both burned and confused! Not too shabby for a bug. But the best part is Dustox’s Poké-Body “Camouflage Body” which prevents Pokémon with 2 or more special conditions from attacking him! That means Dustox will be completely immune to attacks after a Chemical Scale! Which makes it a very worthy competitor in today’s metagame.

Keep in mind; you can use Double Colorless Energy to reduce the energy requirements for the different effects. Usually you’ll be using Beautifly for his second attack, silver scale. If the defending Pokémon has resistance to anything, the attack does 60 base instead of the 30 base. This is a good attack because against a basic Pokémon, you can 1HKO them with a belt, such as Luxray GL.

Nidoqueen is a great tech in this particular deck because you can tank your bed bugs, with her “Maternal Comfort” Poké-Body taking away one damage counter in between turns. Also, Ruthless tail can abuse Double Colorless Energy, becoming quite an attack with an expert belt. Ruthless tail does 50 damage +10 damage for each of your opponents benched Pokémon, for one Psychic energy and a double colorless energy!

Uxie LV.X is here solely for draw power; with his Poké-Power “Trade Off” giving you the ability to thin through your deck. Although he can be used to attack with, “Zen Blade” can do sixty for a Double Colorless Energy.

Spiritomb is critical in this deck because sometimes you are slow to set up and SP decks will take advantage of this. Spiritomb AR comes into play because SP decks can’t use SP radar, due to his “Keystone Seal” Poké-Body slowing them down just enough time for you to set up Dustox or Beautifly.

This is a favorable matchup because you never have to dive into Gengar’s Poké-Power “Fainting-Spell. Special conditions such as Burned and Poisoned will kill Gengars while they are doing minimal damage because you are clearing your hand of trainers.

I have tested this matchup a lot because my partner in crime is using Egg-Meg as his MD-on deck. Doeiqts, if you are reading this, I love your rouge decks and my brother does as well. You deserved of your states finishes. Egg-Meg usually doesn’t run Warp Point, so after you attack with Dustox, they generally won’t be attacking you. Blissey Prime’s Poké-Power “Blissful Nurse” doesn’t get rid of special conditions, so they generally won’t be attacking you. The only advice I give is don’t bench Nidoqueen, because Luxray GL. LV.X will use “Bright Look” and stall.

TGI Pokéturn is a nuisance to deal with, but this matchup can be won with early spiritomb lock and Nidoqueen RR with an Expert Belt, Psychic energy, and Double Colorless Energy. Nidoqueen usually won’t die because you will use Pokémon Reversal to bring Uxie’s to the Active Spot and they will be 1HKOd before they level up.

They are weak to psychic, so Dustox will do lots of damage to Machamps. In combination with special conditions and missed attacks, Machamp has no chance outside of beating Bed Bugs outside of a turn one donk.

So overall, I hope other people will view Bed Bugs as a contender for the MD-on Pokémon format. Thanks to everyone and all for reading and I will be happy to respond to comments, questions, and critiques. Good luck to everyone! 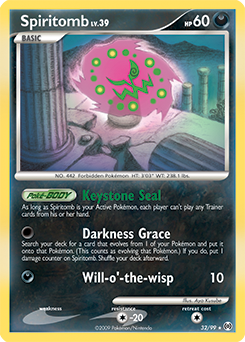