Hey there everyone, it’s Joe back with my third article, and this time it’s not on a totally rogue deck.

As you may have from the very “punny” (yeah I had to) title, this deck will be based on Scizor. Hopefully this red little guy can bring back to life Stage 1 and 2 decks or at least give these such decks a chance to redeem themselves (ok the puns are out of the system).

pokebeach.comFirstly, a look at Scizor. 100 base HP for a stage 1 is not bulky by any means but of course Scizor is metal, which changes everything – slap a Belt and 2/3 Special Metal on and that thing is not going down without a fight. The 2 Retreat Cost is bad, but rarely costs you too much as you have Warps.

Fire weakness is scary for me because a friend of mine uses Blaziken FB which is why I felt the need for the 1-0-1 Exploud tech. The Resistance for Psychic is HUGE, all the Gengar Viletomb decks will have trouble with this guy (unless of course the flip heads when you take them out, darn it!)

I find the most effective way of playing this deck is to set up Scizor as your attacker and stack up (preferably Special) energy, (In this deck energy is key – each special metal adds 20 to your attack and -10 to damage done to you).

Although some may play this deck as a pure tanking deck I believe that you should have 2/3 energy on 1 Scizor maximum. I play this way because 90 damage for 3 energy (or 2 energy + Belt) and obviously, 110 damage with 3 metal + Belt is enough to be seen as a power house and will be a threat to any SP when it can 1HKO most SP LV.X ‘s with 2 + Belt or 3 energy and no belt.

The reason I think to not continue stacking is because it seems (throughout the deck testing stages so far) above 130 attack is overkill for most Pokémon (I have only ever stacked 4 energy and Belt against Gengar LV.X matchups because Scizor has resistance on top of Spec. Metals).

Anyway like a was saying, I believe it to be more productive to begin stacking a backup for some red dead redemption once your active is well… red and dead. =P

I think the use of the stadium Conductive Quarry is very useful as it returns Special Metals to the deck to be reused.

This deck definitely has room for techs but so far I’ve played it safe and have only tried synergy techs. I went for the Metagross twins:
Metagross LA ‘s Poké Power: “Magnetic Reversal” is essentially a flip-a-coin-each-turn “Bright Look.” This has been useful on many occasions for both stalling and for free KOs on unsuspecting benched Pokémon.

Metagross SV’s Poké Body: “Gravitation” is a strange one, it may seem to hurt you as much as your opponent but I have found this effective against various high energy/mirror and other tanking decks because the deck is a relatively fast tanking deck it has little trouble taking on other tanking decks such as Steelix with the addition of this Metagross at the right time, that Steelix goes down that much faster and the setup time for one of those is LONG basically it is goodbye – surprisingly I have actually used this tech as a sort of “Double Flash Bite” and has worked very effectively.

Downsides of the Metagross’s are:

1) A potentially weaker start with Beldum.
2) Something to “Bright Look” into – for opponents to stall or get a cheap prize.
3) Metagross SV hurts your own tanking ability.

SP variants: 60% depending on how much Special Metal is used and how quickly you can take out their Bronzong G can be the difference in a win or loss, however generally Scizor can keep up enough to disrupt and take prizes – just be aware of “Bright Look” because Metagross is a sitting duck.

Gengar Viletomb/Straight Gengar: 60% once again the use of Special energy varies with this deck – however in my list I was careful not to put in a lot of trainers as I knew this deck is quickly rising in popularity, due to being stage 1 topdecking good cards really hurts Gengar, also with Matgross LA Vileplume can be brought up for slaughter.

One thing Gengar has over Scizor is when it Fainting Spells a belted Scizor it really takes its toll on the outcome – *be aware of that Scizor players!*

Machamp: 80% the deck has no problems with this deck unless you get T1 DONKED (oh dear), evolving in this deck is easy and fast so Machamp won’t wreck your team.

Unfortunately at this time these are the decks I have battled the most during my testing, and the deck is yet to be perfected, So please comment on what could be different or how playable the deck is, or even if it has a place in this current format.

One last note – I have been trying hard to think of a way around the whole “Fainting Spell” problem – perhaps Dialga G a possibility – if you think so too or if any other tech springs to mind please comment, thanks. 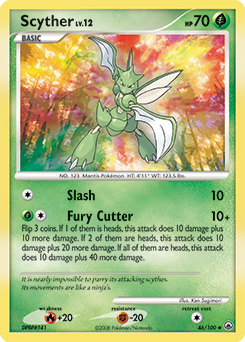