pokebeach.comWelcome to today’s COTD, Vileplume from the Undaunted set. It received a lot of hype before its release because of its Poké-Body “Allergy Flower” which stops both players ability to play Trainers (you can still play Supporters and Stadiums, though). Perhaps the deck that is hurt the most by a trainer lock is LuxChomp. Due to it being an SP build, it relies heavily on the Team Galactic’s Invention Cards, which are all trainers. A trainer lock stops all of that.

Also, it makes the flagship supporter of the deck, Cyrus’s Conspiracy significantly weaker because now it fetches useless trainers from the deck instead of game changing ones. It is usually paired with Spiritomb AR because of it’s ability to increase your set up speed and lock trainers as well. Another card that is often paired with Vileplume is Gengar SF, because of it’s Poltergeist attack, which gains a lot of power when your opponent’s hand is stuffed with trainers.

However, the question that comes into most players minds is, can Vileplume and Spiritomb consistently lock their opponent’s trainers each game and still have enough firepower to win the game? Can the rise in Dialga G LV.X stop Vileplume from running the format? Some players say yes, some say no. What do you think? Please voice your opinions

Modified: 4/5 (the success of Vileplume will vary greatly on what comes out the next few sets)
Draft: 1/5 (stage 2 Pokémon and little trainers in this format) 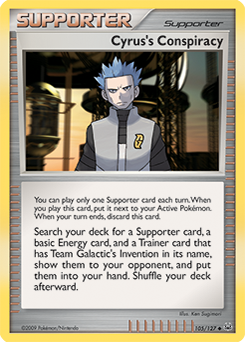