With Battle Roads starting up again, and a fairly decent performance, I thought I’d write another report for my legions of adoring fans. This past Sunday Batmylashes and myself headed out to Bremerton, WA, in what we figured would be a smaller tournament, and it was. Only a top 2 for Masters, along with 4 rounds.

If you’ve read my previous article regarding the Battle Roads format (and you better have), you’ll know that I predicted LuxChomp to still be very relevant, Gengar/Vileplume to be very good, and DialgaChomp to be the BDIF. After some deliberation, I decided I’d go with what I knew the best, LuxChomp. I won’t give out my full list here, but I did play a Mewtwo counter, and no Dialga.

Chad is that dude. Unfortunately I can’t say our game was an amazing one. He opened Mareep to my Luxray and Ambipom. He goes first and passes. I then Poké Turn the Luxray, attach an L energy and an Energy Gain to Ambipom, and swing Snap Attack for the win. I hate donks. We played a friendly game afterward which was much more competive.

This was my first time meeting him, but Jeremy is Chad’s roommate, which automatically makes him cool in my book. He gets a pretty decent start to my slightly slow one, and the game gets going. Unfortunately he doesn’t get much of a chance as I hit some key Poké Turns and DCEs to be able to continously Bright Look + Dragon Rush. He manages to get a Tangrowth up, but by that point it was too late. Definitely an interesting deck concept, but I think SP just plain outspeeds it. Great game though!

My first meeting with Rocky was an epic one. It was Spring Battle Roads of last season, and I was playing Beedrill to his Garchomp SV. He kept bouncing my energy for the entire game, and was able to take a straight 5 Prizes. After I finally managed to bring a Garchomp down, he couldn’t get anything further set up and I was able to take 6 straight prizes in one of the oddest games of my life.

Unfortunately, this game couldn’t compare to our first. He opened Gible to my Luxray/Bronzong. I go first, attach a DCE to Luxray, and bite for 30. He has a garbage hand, and can only Cyclone my Bronzong up. I top deck a Poké Turn, and Bite again for the KO, and my second donk of the day.

Matt’s a fantastic player, and runs the league in Bremerton with his wife, Rose, who was TOing today. Matt spent most of last season judging, so he’s a little underrated by the community at large. He’s consistently shown the ability to build competitive, creative decks. He was working on Sablelock-like things before anyone else I knew.

With all that being said, I came into it suspecting a tough game. I went first, Luxray/Unown Q to his Ambipom. I stupidly attach and pass, and he simply Tail Codes the energy to the Q, essentially making me discard an energy for nothing. I then attempt to Bright Look and Set-Up and get met with a power spray on both. With a decent field presence but nothing really working out, I pass.

Unfortunately it all goes downhill for him from here. He isn’t able to see a supporter all game, and between Dragon Rushes, Bright Looks, and Flash Impacts I take 6 Prizes to his 0. Really weird draws for him, wish it could’ve been a bit more competitive.

Matt is in the finals with me again, so it’s LuxChomp vs. LuxChomp.

Game 1: I open with a lone Unown Q to his Azelf. I go first and pass. He drops a Crobat and Flash Bites. Cyrus’ for a Poké Turn and Flash Bites again, and then drops a Uxie and hits the last Poké turn for the game.

Game 2: Luckily this game actually lasts past the first few turns! We both get decent starts, but I’m able to get up a little bit faster. I think I take a 2 Prize lead at one point, but after he gets his field set-up with Ambipom, Dragonite, and Garchomp, it becomes very difficult for me. This match taught me more than anything the importance of Dragonite in the mirror, as if there’s a Garchomp/Ambipom on the field, a Dragon Rush will eliminate one of those threats, and you can assume they’re not going to get the stuff they need to fuel the second one. With all three on the field though it becomes an entirely different game.

He starts to pull ahead and, after spraying a few key Bright Looks, he clinches the game.

So, going 4-1 and losing to someone I beat in swiss isn’t a bad day in my book. I’ve got 2 more BRs to play in and hopefully I’ll do well enough in them to justify a report. 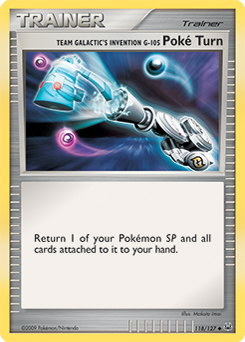