Hello everybody! I have been exceedingly lazy recently and in sorting stuff out for uni I have completely forgotten to even look at SixPrizes! Can you believe it? I totally forgot!

So over the last week or so I’ve been catching up with all the articles and thought I should share with you another of my utterly crazy decks, this one being Legend Box

This deck will achieve 1-of 2 possible outcomes when you play it, and it depends entirely on luck.
1) You either epicly win and completely anihilate your opponent.
2) You will deck yourself out in 5 turns or so and lose.

So how does it work? Or not work as the case may be.

pokemon-paradijs.comJirachi
Jirachi is amazing! It’s the only way you can put it. This brilliant little purple wiggley thing with a star shaped hat is wonderful.
The deck is based on playing Legends, and get them out by rushing through your deck like crazy.

Jirachi’s first attack “Detour” works perfectly with this strategy. If you’ve played a Supporter card during your turn, you may use it again! WOOHOO. As all of the Supporters in here are (excluding Farmer Palmer) are drawing supporters, so it’s great at filling your hand, drawing 4-6 cards a turn.

This also makes “Team Rocket’s Trickery” really really fun! When you play it, you draw 2 cards, and your opponent must then discard a card from their hand. If you get a chain of these running and you’re using Detour on them, that’s right, you’re going to completely empty their hand. What better way to start the game but to fill your hand with cards and empty the opponent’s?

Even when your opponent gets round to killing it, you can use it’s Poké-Power “Final Wish” to search your deck for any 1 card. Pretty Neat; and with a free Retreat Cost it makes this Basic a perfect play.

Unown R
This is just one of those things that lets you draw through your deck. It’s Poké-Power: “Retire” (more fondly known as “SOD OFF”) will let you discard your benched Unown R to draw a card.

It also has an attack which can be useful in some situations. For 0 energy you can move your energy around and reattach it as you like. I’ve never used it but I’m sure it’d useful for something.

Kyogre Groudon Legend
This is the Big Nasty Thing lurking inside the deck.

For 2 F Energy and 2 Colourless Energy you may use “MEGA ERUPTION” and discard the top 5 cards of your deck… This is where we stop reading that attack.

So for 2 Waters and 2 Colourless Energy (hopefully a DCE if you’re lucky) you can “MEGA TIDAL WAVE” (yes it’s obligatory that this attack name is bellowed out across the room; somehow it just sounds… better). This discards the top 5 cards from your opponent’s deck (that sounds better), and will do 30 damage to EACH of their benched Pokémon for every energy card you discarded.

It doesn’t even matter if you don’t hit any energy, as this thing has a whopping 150 HP it won’t be an easy thing to kill off, and during that time your opponent’s Deck is going to get very small.

Entei Raikou Legend
This Pokémon was more of an afterthough. It’s probably the best Legend from the bunch. I intend to replace it with Dialga Palkia Legend when it’s available.

Although it is still a pretty nice card. For a Lightning and a Colourless “Thunder Fall” will deal 80 damage to all Pokémon in play with Poké-Powers. Great for knocking off your opponent’s benched Pokémon with Powers that your opponent relies on.

However it will also kill off your Jirachi’s. I would love to do this but Final Wish doesn’t activate if you kill it yourself, which is a terrible shame. Although if you are losing badly and can’t deck yourself out to lose, you can throw down a load of Jirachi’s and Unown R and Thunder Fall for a massive suicide.

His other attack “Detonation Spin” required 1 Fire (Rainbow) and 1 Colourless Energy to hit for 90, and discarding the Fire (Rainbow) Energy, if you really need to attack the active.

This is where things get a little interesting.

There are many ways to play this Deck, and many possible ways to utilise the trainers here. So I will try to explain the methods and combos as well as i can.

pokebeach.comTeam Rocket’s Trickery / Professor Oak’s Visit
Both of these give you draw power and are abusable with Jirachi’s Detour.

Team Rockets forces your opponent to discard cards (WOOHOO), but Oak allows you to draw 1 more card which may be useful in a difficult situation at the expense of putting a card to the bottom of your deck. (Possibly putting a Legend half under so you can Legend Box it later.)

Palmer’s Contribution
Farmer Palmer will get you 5 cards from the discard pile back into your deck. I’m not sure what else you can say about this. Apart from you can Detour it to do it again if you really do need to.

Legend Box
This allows you to look at the top 10 cards of your deck, if 2 Legend Halves are there you can play it straight onto your bench and attach ALL Energy within those 10 cards to it. There are good and bad sides to this.

If you use it, there is almost a 0 chance it will work. It hardly ever works for me anyway.
When it does work, it will often attach no Energy, or absolutely loads. Getting Entei Raikou Legend with 5 Waters and a Double Colourless isn’t very helpful. I suppose this is where Unown R finds it’s calling.

There are several ways you can use this. Keep reading some more for some of my ideas. I’d only use this on it’s own (without a combination of other trainers) if i was REALLY desperate, or if my Deck was pretty small and I know there are both halves to a Legend in it.

Poké Drawer +
You put 1 down, you draw a card! Great! You put 2 down, you search your deck for 2 cards! Even better! With the crazy draw power you get from Jirachi and the Supporters, you’ll often find you have 2 Drawer in your hand and searching for any 2 cards in your deck is great in my book.

Pokédex Handy 910is
I think this trainer probably has the longest name ever! Anyway. It allows you to look at the top 2 cards of your deck and put 1 into your hand, and one to the bottom of your deck. It lets you have a bit more choice in what you draw. Instead of drawing a Jirachi, you can use PokéHandy to look and choose whether you want Jirachi or the card underneath. Can be quite useful.

pokebeach.comGood Rod
I think the Rod of God is a pretty underestimated card. It gives you so many possible uses you never think of until you actually play it. Most of the time I just keep these stacked in my hand until I find a use for them. Here’s some possible examples:

You’ve used your Legend Boxes and found nothing. Flipping tails on a God Rod will allow you to pop it back to the top of your deck ready to use again next turn. (Or if you can SOD OFF with your Unown R you can draw it and use it immediately).

You keep drawing rubbish and have no Supporters in your hand to draw into new cards. Flipping tails on the God Rod will let you put a Pokédex Handy 910is to the top of your deck, ready to draw to give you more choice in what goes to your hand.

Your evil opponent finally killed your Kyogre Groudon Legend and you don’t have another one sorted to bring out yet. Use up all those saved God Rod’s until you get 2 heads on them allowing you to put both halves of the Legend on top of your deck. Followed by a Legend Box you’ll get your Legend back onto your bench and hopefully fully charged up ready to MEGA TIDAL WAVE again.

My favorite use: You have no cards left in your deck! You use God Rod and flip tails so you can put God Rod back on top of your deck. Doing this on successive turns will prevent you from Decking out and losing, and will drive your opponent absolutely nuts.

I’m sure there are many more things you can do with the Rod of God but none pop into my head right now.

pokemon-paradijs.comPoké Radar
I think this is another under-rated card, especially in decks that run high numbers of Pokémon. You look at the top 5 cards of your deck, and take out as many Pokémon as you find. You don’t just take one, you could take loads! Or none at all.

If you’ve put several Legend Halves to the bottom of your deck with Prof Oak, you may want to use this (it’s the only trainer that shuffles your deck; exc. Double Drawer) to hopefully move them nearer the top if you want to attempt a Legend Box.

Pokémon Rescue
Grab a Pokémon from the discard pile and pop it into your hand. Used mainly to grab Unown R’s so you can get them to SOD OFF again to draw another card.

So that’s a run down of everything in the deck. Over time I’ve found the best plan is to use Jirachi’s Detour with Team Rocket’s Trickery to empty your opponent’s hand and at the same time get out Kyogre Groudon Legend as fast as possible.

After that then you can look at playing with trainers and God Rods etc to keep the pressure on.

The trick is to know when to stop drawing like crazy so you don’t deck yourself. However if you’re losing, feel free to deck yourself or Thunder Fall yourself to doom to save yourself any further humiliation :D

Let me know what you think! 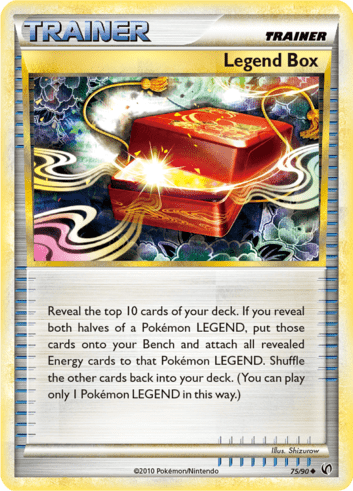